This object is an edge-on warped spiral galaxy located 150 million light years away in the constellation of Camelopardalis at a declination of +71 degrees. It spans 2.3 arc-minutes in our apparent view, which corresponds to a diameter of 100,000 light years. This may qualify as the most visually striking galaxy not to have a Messier, NGC, or IC designation.

The warping and color make this one of my favorite galaxy objects. As you might expect, it is the highlight galaxy in my Warped Disk Collection.

Something seems to be disturbing this galaxy and causing star formation in the outer disk region, as reflected by the intense blue color and star clusters. A faint disk stream extends from the left edge of the disk towards the galaxy (UGC 3714) at lower left. That galaxy is an interesting bright face-on spiral galaxy, unique in that it appears to have a bright sphere of starlight around it which somewhat obscures the disk details. The data shows it about 140 million light years away, about 10 million light years from UGC 3697. This is not close enough to cause disturbance. But, this type of distance data has a range of uncertainty. I sense from the star stream direction that these two are interacting, but that is just a guess on my part.

Still, what is causing the severe warp of UGC 3697? Surprisingly, scientists are not in agreement as to why many galaxy disks (even our own) are warped. Simulations show that gravitational effects from nearby galaxies are not significant enough to create such a warp in a nearby rotating galaxy. Possibilities that may cause the warp include a recent merger, the presence of satellite galaxies, or the always reliable fallback explanation of a dark matter halo. In any case, it is likely that the severe warp we see on UGC 3697 is a transient effect, and we are simply fortunate to be seeing it at this interesting snapshot in its history. 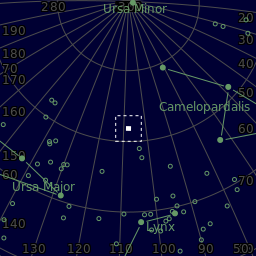