In 2018, two amateur astronomers came together to find, analyse and photograph previously unknown planetary nebulae. The team, consisting of the French and German researchers Xavier Strottner and Marcel Drechsler, already discovered several hundred new candidates and created their own list of objects: the StDr catalogue.

Cooperations worldwide
We have been so successful in our research that the StDr catalogue has grown to 140 candidates and 31 other objects at present. Most of these have now been confirmed as true planetary nebulae by spectroscopy and photographed by astrophotographers worldwide. International cooperation with other amateur astronomers is also nothing unusual. Together with the US amateur astronomer Dana Patchick, for example, nine extraordinary discoveries were made that are listed in the PaStDr catalogue created by the trio.
In total, we have been involved in more than 300 scientifically relevant discoveries in the past three years.
The team also maintains close friendships with other discovery teams, such as the two Indians Utkarsh Mishra and Sankalp Mohan.
Close collaboration is essential in astronomy and leads to great new discoveries much more often. The bundling of skills and expertise from a wide range of disciplines allows new candidates to be quickly identified, analysed and finally registered. Therefore, within a short time we established an international network of outstanding astrophotographers, spectroscopic observers as well as professional researchers, so that it is now possible to come across a StDr object in almost any region of the night sky. 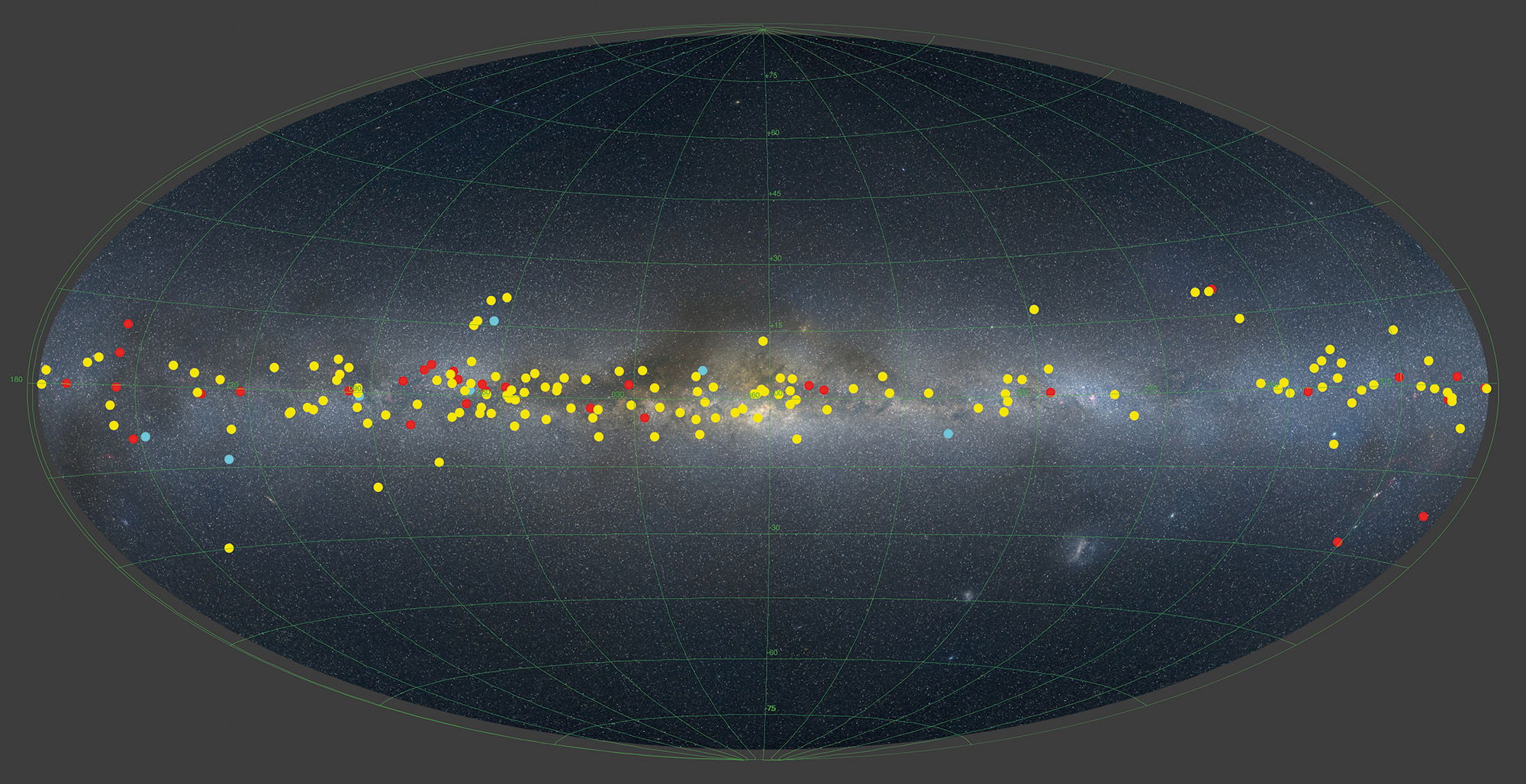 Like needles in a haystack
Of course, discovering a new, previously unknown planetary nebula always relies on a certain amount of luck, because the night sky is notoriously vast, and the potential discoveries are often tiny. The lunar disk occupies a spacial angle of 0.2 square degrees in the sky, which corresponds to about 1/210 000 of the entire sky.
A typical planetary nebula - and thus an average new candidate for our catalogue - has a diameter of only a few arcseconds; but the entire night sky has an area of more than 500 billion square arcseconds.
The hunt for new planetary nebulae is thus like the literal search for a needle in a haystack.

Of course, it is impossible to scan these cosmic expanses with the naked eye only to come across an unknown object by chance at some point.
We therefore proceed systematically and concentrate on defined markers, for example conspicuous features in the photos from sky surveys and from amateur astronomers just like arc-shaped segments that can be assigned to a possible planetary nebula.
Other markers are the white dwarfs, which are always more or less at the centre of such a nebula.
If such a marker has been found, then all available sources are screened to find at least one further evidence. In this way, we rule out the possibility that it is a possible artefact on the digital photos or older photo plates used. Other sources include data from the UV space telescope GALEX, the infrared satellites WISE, 2MASS, and Spitzer, which are freely available to all interested parties, as well as sky surveys in the visible and near-infrared wavelength range such as Pan-STARRS, DECaPS, DSS, SHS and IPHAS.
For the analysis of such data, the team has developed special types of image processing as well as filters to improve contrast, which make it possible to detect the finest structures in the first place. But despite many years of experience and proven techniques, it often takes 10, 20 or even more hours of intensive searching to find a single previously unknown candidate.

The search goes on
The search is no longer focused solely on the northern hemisphere - just as many discoveries are possible from the southern hemisphere.
To be able to shoot these candidates as well, we regularly book observation time at remote-controlled telescopes in Chile.
The costs for this are financed privately or through donations.
The research work described here consumes enormous amounts of time, without any certainty of success; it is a passionate obsession for detail, a true labour of love.
But when a new planetary nebula is found and a magnificent image is taken at the end, that is the reward for all our efforts. We will continue to hunt for unknown treasures of the universe in the future. Information on all current candidates and verified objects in the StDr catalogue, including position information, can be found at http://planetarynebulae.net.

A big thanks!
An astrophotographer always takes a risk when he spends many dozens of hours photographing a previously unknown target. Because despite conscientious research, the object is only a candidate at first and nobody likes to waste their time. But we are aware of our responsibility when we recommend one of our candidates. Our great thanks therefore go to our wonderful astrophotographers Andreas Bringmann, Andreas Zirke, Markus Blauensteiner, Mathieu Guinot, Nicolas Outters, Peter Goodhew, Robert Pölzl, Rochus Hess and Ola Skarpen for their incredible patience and trust.
Special thanks go to Pascal le Dû and Quentin A. Parker for their support and numerous evaluations of our candidates. Without them, none of our catalogues would exist.
×