My image of this absolutely stunning image of our Night Sky; The Belt and Sword of the Contallation Orion. This constelaltion reigns in the November to Februrary Night's Sky, and is a famous Summer contallation in the Southern Hemisphere, or a Winters one above the Equator.

The belt is formed with 3 stars, almost equally distanced from each other and in a semi-straight line. In binoculars the region is very beautiful. The stars are Mintaka, Alnilan and Alnitak. A little bit due North you will find the Sword of the hunter, that is visible to the naked eye a a fuzzy star even in modestly dark skies. That is a Nebula, the Great Orion's Nebula, catalogued as M42/43, a beatutiful, and probably the most famous Nebula in the sky (I wouldn't say it is the biggest or the most beautiful myself, because IMHO, NGC 3372 - Eta Carina is equally stunning, if not a bit better. Even though, M42 is spectacular). With a 7x50 bino you can see some of its nebulosity, further enhanced with the use of a telescope (I use a 6inch, and I must say that it is very good. I've never observed through other intrument, but I bet that on a 10-14 in dobs it is even better). On long exposure photos, even more nebulosity is revealed, as seen in this image. In the heart of it there is a group of 4 stars, the Trapezium, which looks very nice at med-high magnifications. Back on the Belt, in the bottom left corner, you can see the Horsehead and Flame Nebulae, IC 434 and NGC 2024, respectively (actually, the Horsehead is that Dark Nebula silluated against IC434, designated as Barnard 33). A lot of dust is also visible in the region.

The image was taken in a single night, but I had some problems during the session, and I actually took ~2h to finish all the frames. My 2nd battery failed, so I was with only a single Canon battery, which resisted bravely until 11pm, when it was completely drained, in the middle of one light frame. After a quick recharge, I finished the frames. However, instead of 20, I took 19 subs. It may be Murphy's Law, but "the battery will always end in the middle of a exposure". It was a productive and equally beautiful night, on a quite dark location. In this exact same night, I took my Taurus, NGC1499 and M45 set, and on the description of that image you will find my explanation about what looked like a noticeably brighter sky. Unfortunately, I have no SQM so I have no numeric data.

In that night I performed a quick Drift Alignment using DARV, and I was easly able to get 5min frames at 50-70mm. However, @200mm (280 FF equiv) the most I could push was to 180s, and I still had some trailing due to Periodic Error. I will try PEC next time, and a better alignment. Remember that this image is NOT GUIDED. Even tough, 180s is the longer I ever went at this FL, and a nice step up from my 60s on EQ3-2. How long do you think an HEQ5 can go unguided? I believe that it'd be ~4-5 minutes at most @200. What do you think?

Overall I'm extremely pleased and happy with this image. I didn't expect to capture that much light to show those dust lanes. Besides, my camera is NOT MODIFIED, so it has a very limited H-alpha response, and the Horsehead region was greatly captured for me. It don't have that puchy deep red of H-alpha, but it was better than expected.

Taken from Rural Skies (Bortle 3-4), on Cristina, MG, Brazil. Thanks for seeing.

*The Revision -E- is a HDR version, in which I added 10x30s subs at ISO 400, taken from the same city, but instead of capturing in the Rural Area, it was captured from downtown, on a Bortle 5-6 sky. The HDR subs were stacked in DSS, and than were processed on CS2, as a LUMINANCE (Grayscale) image, that was combined with the Grayscale of the "normal - long integration" (Rev. -C-) using layer masks. The final HDR Luminance was applied to the same long integration -C- revision.*

*Revision -F- is a Color Corrected version of the HDR -E-*

*Revision -H- features further processing in Google Nik's Color Efex using Detail Extractor and Color Contrast Range. It bought out the Horsehead IC434 a little better, but the improvement is marginal to me.* 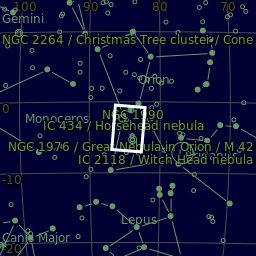