The Iris Nebula (NGC 7023) in Cepheus, shown here, is an example of a very massive, relatively young, intense blue star, reflecting from the surrounding nebula rather than exciting that nebula. The result is a blue color rather than the red color of excited hydrogen alpha. The star is a relatively dim 7th magnitude star (HD 200775) but is located in such a place to reflect much of its light in our direction. It is about 1,400 light years from us, and the illuminated portion of the nebula is about 18 arcminutes across, making it quite small in the stellar order of objects.

The bright orange star in the upper left (north is to the left in this image) is T Cephei, a red giant with about the same brightness as HD 200775, but much closer to us. T Cephei is only about 614 light years from earth and is at the opposite end of its life from HD 200775. HD 200775 is a very young star with a still coalescing protoplanetary disc which may eventually form into a planetary system, while T Cephei is a huge, swollen, red giant that fluctuates both in brightness and size by a huge factor every 400 days or so. T Cephei shrinks to about ten times the size of our sun and then expands so far in its peaks that it would encompass any planets as close as mars and consume them. T Cephei is so close to the end of its days that it has already started to exude a gas cloud of expended elements, and that cloud can be seen glowing red around it.

Between T Cephei and the Iris is another bright star, HD 201731, a type B2 star, which is to say, a white giant about 17 times brighter (and larger) than our sun. It is a "main sequence" or more or less typical star, albeit a really big one about 1,074 light years from earth. It puts out a much larger component of ultra violet than does our local star (the Sun) and like virtually every other star we have observed, is probably not conducive to life nearby.

A last comment for any who have read this far. The rest of the stars in this image are far, far away, many of them brighter than the ones I described, just much farther. More, there are many, many dim, fuzzy stars in the image. Those are partially obscured by clouds of molecular hydrogen that fills what we once assumed was the "emptiness" of space. Another observation is that we are in a very, very thinly populated area in our galaxy. Were there a lot of stars closer, we probably would not be here. T Cephei is going to blow up at some point (and may well have already done so). That it is 614 light years away is a grace.

This image is, by astrophotography standards, a snapshot. It is composed of six exposures of 120 seconds each shot with a Canon 60Da camera through a Williams Optics Star 71mm scope, which really is just a very high quality 354mm telephoto lens. I hope to focus my 2,800mm focal length scope on it one night and spend the night capturing a LOT of exposures to get the depths of this beautiful Iris. 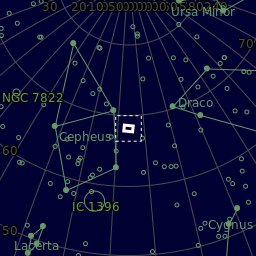