our First "official" Light from Chile.

Centaurus A, also called NGC 5128, is a curious massive elliptical galaxy with, at its heart, a supermassive black hole. It is located about 12 million light-years from Earth in the constellation of Centaur and has the distinction of being the most powerful radio galaxy in the sky. Astronomers believe that the bright core, high radio emissions and jet-shaped details of Centaurus A are produced by the central black hole, whose mass is about 100 million times that of the Sun. Matter from the dense central parts of the galaxy releases a large amount of energy when it falls on the black hole.

The radiation that fills the majority of the image comes from hundreds of billions of older, colder stars. However, unlike most elliptical galaxies, the smooth shape of Centaurus A is disturbed by the irregular broadband of dark matter that obscures the center of the galaxy. The dark band contains a large amount of gas, dust and young stars. The bright clusters of young stars at the top right and bottom left of the edges of the band show the red radiation of star-forming hydrogen clouds, while a few isolated dust clouds appear in the starry background. These structures and powerful radio emissions are a strong indication that Centaurus A is the result of a collision between two galaxies. The dusty band is probably the unrecognizable remnant of a spiral galaxy shredding under the gravitational pull of the giant elliptical galaxy.

Two groups of reddish filaments, practically aligned with the huge prominent jets in the radio image, extend from the galaxy to the left corner of the image. Both sets of filaments are star nurseries containing young hot stars. The internal filaments extend over the left side of the dust band, about 30,000 light-years from the core. The outer filaments are visible further outwards, about 65,000 light-years from the galaxy nucleus and close to the upper left corner of the image 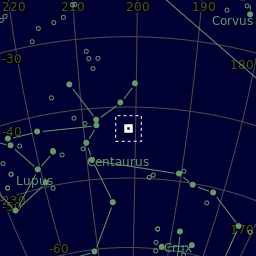