The best fit yields a distance of 161.2±0.9 pc, suggesting that the eastern portion of Taurus (where HP Tau/G2 is located) corresponds to the far side of the complex.
Magakian 77 is classified as a cometary Nebula into the Magakian catalog.

The whole of the Taurus region (a total area of 52 deg2) has been observed by the Herschel Spectral and Photometric Imaging Receiver (SPIRE) and Photodetector Array Camera and Spectrometer (PACS) instruments at wavelengths of 70, 160, 250, 350 and 500µm as part of the Herschel Gould Belt Survey.

Compiled/resumed by Antonio F.Sánchez. Many thanks to Mr. Sakib Rasool for suggesting me to image this area. 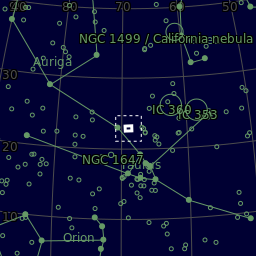