The left hand panel was imaged on the morning of 15th January 2016. This shows the comet it its correct position for that date. The right hand panel contains the extra information for your eyes and brain to reconstruct the image with 3D perspective. To do this another image of the comet taken 24 hours later (and over 2 degrees further away) was registered into this star field. In the 24 hour interval our viewpoint from Earth changed sufficiently for the angle between the ion tail and dust tail to have been reduced by approximately 5 degrees. It is this change that provides the information for your brain to "see" 3D with the ion tail stretching into the distance. The final step was registering the day + 1 comet image such that both comet images share the same approximate vanishing point for the ion tail (just to the left of Alkaid) and also the comet heads are aligned horizontally. To see the 3D to best effect it is important to keep you head upright (no tilting your head to the left or the right).

Revision B: Corrected a minor comet registration error in the left panel 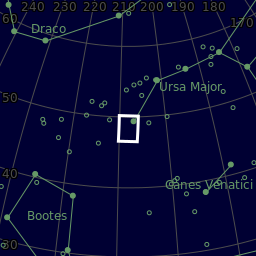