This image captures a pair of Arp objects located in the constellation of Canes Venatici at a declination of +31 degrees. Both of these are Astrobin Debut Objects.

Each Arp object is located about 225 million light years away. They are likely to be interacting with each other. Arp 36 (magnitude 15.0) is located at upper right and Arp 183 (magnitude 14.4) is at lower left. Each galaxy is similar is size, spanning 1.4 arc-minutes in our apparent view and having a diameter of 90,000 light years.

Arp 36 was classified by Dr. Arp into the category of Spiral Galaxies – Integral Sign. This is an interesting category, in that it does NOT include the classic edge-on integral sign galaxy, UGC 3697. Instead, the 6 Arp "integral sign" galaxies (Arp 31-36) are less dramatic but amazingly consistent. All are face-on grand spiral galaxies with 2 strong arms. In all 6 cases, ,these arms appear as a symmetric, stretched-out “S” shape where the arms have unwound a bit. Within the arms are many star clusters, making the arms look lumpy. The galaxy cores are poorly defined.

Since all of the galaxies in this category have similar characteristics, it would make sense that they are the result of the same dynamic processes. But those processes are a mystery at this time. To me, the shapes seem reminiscent of objects like Arp 244 (Antennae Galaxies) which are obviously the result of 2 spiral galaxies merging. Such a merger would also initiate star formation, leading to the lumpy look, as well as messing up both cores. So it seems logical that the galaxies of this Arp category are merging galaxies which are towards the end of their merger, such that they appear to look more like one galaxy at this time.

One strange aspect of this object is that a star cluster below and left of the core, about 1/3 of the way along the lower arm, appears to have a green tint. I can’t explain that.

Arp 183 is also interesting. For more information on that object, please see my dedicated post on it here.

Although the Arp objects take center stage here, I like the numerous background galaxies just as much. There are a number of interesting galaxy cluster patterns here. The “<” pattern of distant galaxies in the middle of the image is my favorite. I also like the galaxy groupings above and right of center. These galaxies look to be about 2 billion light years away. 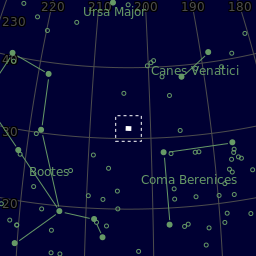