Here is one more go at the Pleiades. Always a favorite, certainly for me. I just love this target. One of the few you can easily see with the naked eye, even in a somewhat light polluted location. As such, it requires a wider FOV than my 14" Planewave CDK14. To the rescue comes the piggy backed Televue NP127is using a full frame ASI6200MM Pro, giving me a 2x3 degree FOV, only slightly cropped in this presentation. The 6200 having 62 million pixels also provides a lot of detail over this largish FOV.

The Pleiades , also known as the Seven Sisters and Messier 45, M45, is an open star cluster containing middle-aged, hot B-type stars in the north-west of the constellation Taurus. It is among the star clusters nearest to Earth, it is the nearest Messier object to Earth, and is the cluster most obvious to the naked eye in the night sky.

The cluster is dominated by hot blue and luminous stars that have formed within the last 100 million years. Reflection nebulae around the brightest stars were once thought to be left over material from the formation of the cluster, but are now considered likely to be an unrelated dust cloud in the interstellar medium through which the stars are currently passing.

Computer simulations have shown that the Pleiades were probably formed from a compact configuration that resembled the Orion Nebula. Astronomers estimate that the cluster will survive for about another 250 million years, after which it will disperse due to gravitational interactions with its galactic neighborhood.

Together with the open star cluster of the Hyades the Pleiades form the Golden Gate of the Ecliptic.

The name of the Pleiades comes from Ancient Greek. It probably derives from plein ("to sail") because of the cluster's importance in delimiting the sailing season in the Mediterranean Sea: "the season of navigation began with their heliacal rising". However, in mythology the name was used for the Pleiades, seven divine sisters, the name supposedly deriving from that of their mother Pleione and effectively meaning "daughters of Pleione". In reality, the name of the star cluster almost certainly came first, and Pleione was invented to explain it. 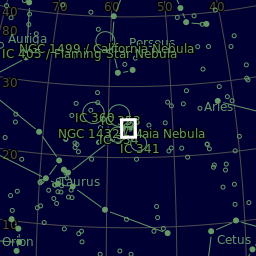