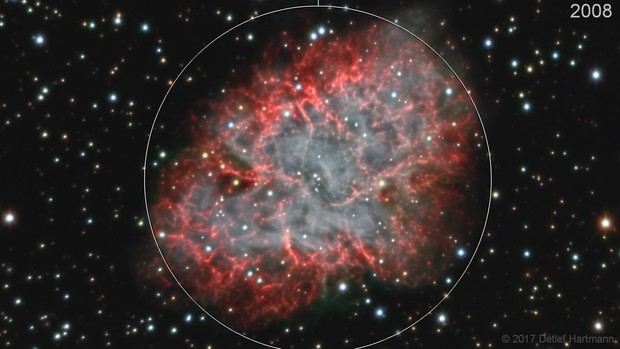 Over the past 10 years I have worked to create my "astronomical lifework" at my remote observatory at the "Emberger Alm" in Austria. The same equipment (0.44 m Newtonian telescope, SBIG ST-10 XME, AO-

was used all the time. Now eventually I have finished the "Crab Nebula one decade time-lapse movie". 386 single L (bin 1x1), R (bin 2x2), G (bin 2x2), B (bin 2x2) frames with a total integration time of 32 hours were combined with 10239 calibration frames (bias, darks, flats) into 10 color images, one for each year from 2008 to 2017. Strong high dynamic range processing and sharpening reveals the versatile movements of the white synchrotron radiation beside the normal expansion of the red filaments. The 10 color images were finally combined to an animated gif with a frame duration of 150 msec.

Please click at the image to see the animation in full detail!

A short video with music you can find at vimeo: Crab Nebula (one decade time-lapse movie)

The computed expansion for a period of 150 years you can find at: Crab Nebula (computed Expansion 1950 - 2100), animated GIF 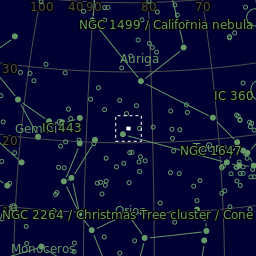