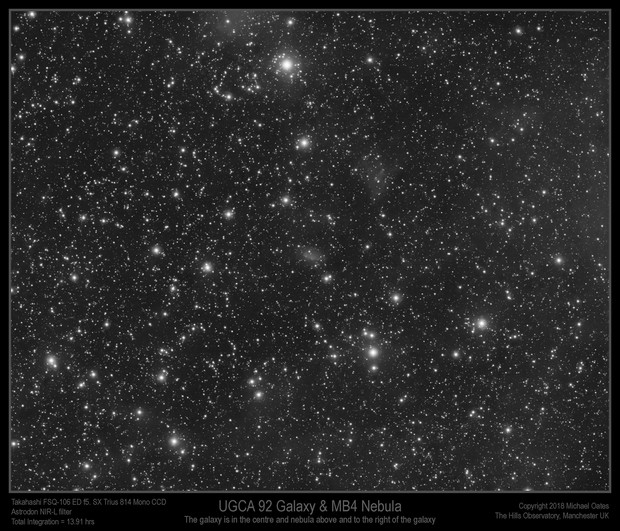 Astrophotography does not always have to be about pretty pictures, I get a great deal of satisfaction from recording unusual objects as well. Here is such an object and it is certainly not the most picturesque of images, but as far I can tell, this is the only image of the MB4 nebula apart from the discoverers original image, that of McCall & Buta.

I am part way through imaging as many of the IC 342 / Maffei Group of galaxies as I can and UGCA 92 is a member of that group. As many of these galaxies are partly hidden by our galaxies dust and gas, Near Infra Red (NIR) imaging is the best way to record these galaxies, so I have mainly imaged these in NIR. After integrating a few subs taken of UGCA 92 I noticed a triangular patch of light above and to the right of the galaxy. Intrigued as to what this might be I set too searching for what I thought could be a faint irregular galaxy. But after searching for a while I found no record of any galaxy near to UGCA 92. And at this point I started to wonder if I had found a new galaxy. It was not until during my search including the words “near UGCA 92” did I find a paper by McCall & Buta et al describing their discovery of an object near UGCA 92. They also thought the object was galactic, which turned out to be, after further observations, a rather unusual nebula that glows in NIR and is an outflow from a pair of Young Stellar Objects (YSOs), the bright pair of stars in the middle of the nebula. If you want to know more see the link below to their paper.

So I would like to think this is an independent discovery, even though it was discovered 25 years ago. If anyone knows of any other images of this object, please let me know.

You will also see in the image other areas of nebulosity, this is dust and gas in our galaxy and can also be seen in images taken with IRAS. Had this nebula been amongst that gas and dust further to the right it would probably have gone undetected.

The image here was put together after taking lots more subs in order to get a better image of the object a total of 58 subs totalling 13.9 hrs integration. I have done very little processing apart from stretching with HT, curves with, yes curves transformation and some star reduction and noise reduction. With such a long integration in NIR the stars can get quite bloated and trying to add RGB stars proved a waste of time, so I kept it as a mono image. North is to the top and west to the left. This was imaged in 2017 on 4 nights in Jan, Sept & Dec and Jan 24 2018

MB4 is the fourth object that McCall & Buta have found during their observations of the IC 342 / Maffei Group, the other three all being galaxies. 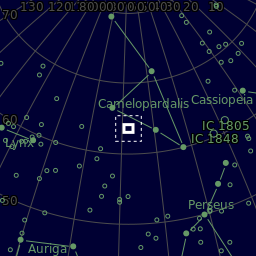