In the twilight of summer, a paradise of lilies covers the blue and violet landscape, bells in the wind, and silent thoughts escape through the trees, echoing distant as the sound of a windmill rolling in the wind.

I imagine a world in a magical, shell-shaped mirror, reflecting the life and feelings of those who embraced it. Cotton into the wind, carving powerful heavenly ties with its look.

You are my hummingbird. This is how I see you, no matter where I look or search for you! And magic happens, you give me back the reflection of your soul shaped in mine, a supernatural picture breathing words of love.

And whatever world is sighted, a hummingbird and its soul mate will continue to shine enfolded in its splendor, one soul, vibrant, fervent, romantic and forever intense… And the distance will never wilt its mysterious existence.

Messier 27 (NGC 6953), also known as the Dumbbell Nebula, is a planetary nebula in constellation Vulpecula ate a distance of 1.360 light years from Earth and with a linear radius of 1,44 light years.

Messier 27 is the second brightest planetary nebula in the sky, second only to the Helix Nebula in Aquarius, and the easiest one to observe because it has a higher surface brightness than the Helix and is therefore easier to find.

The name Dumbbell comes from the English astronomer John Herschel, who observed the nebula in 1828 and compared its shape to that of a dumbbell.

The Dumbbell Nebula is large in size and quite bright, which makes it a popular object among amateur astronomers, as it can be seen in binoculars and small telescopes. The nebula has the shape of a prolate spheroid and appears along the plane of its equator when seen from Earth.

Planetary nebulae are what our Sun will produce when it nears the end of its life and nuclear fusion stops in its core. These nebulae are formed when evolved giant stars eject their outer envelopes, exposing the hot core of the star, which then ionizes the surrounding cloud of expelled material with ultraviolet light.

The central star, a white dwarf, is estimated to have a radius about 0.055 solar radius which gives it a size larger than most other known white dwarfs. It is an extremely hot bluish star with an estimated temperature of 85,000 K. The star is believed to have a companion: a faint, magnitude 17 yellowish.

The Dumbbell Nebula is more than 100 times more luminous than our Sun, while the central star has only about a third of the Sun’s luminosity and the companion is almost 100 times fainter. The nebula is brighter than the star itself because the star mainly emits in the non-visible part of the spectrum and then the nebula absorbs the radiation and emits much of it in visible light.

Like many nearby planetary nebulae, the Dumbbell contains knots. Its central region is marked by a pattern of dark and bright cusped knots and their associated dark tails. The knots vary in appearance from symmetric objects with tails to rather irregular tail-less objects and each of them has a mass three times that of our planet.

The estimated age of M27 is under 14,600 years. The Dumbbell Nebula expands at a rate of up to 2.3 arc seconds per century. 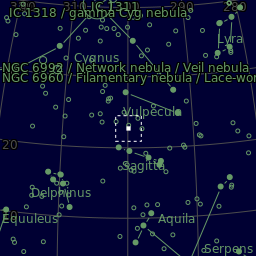