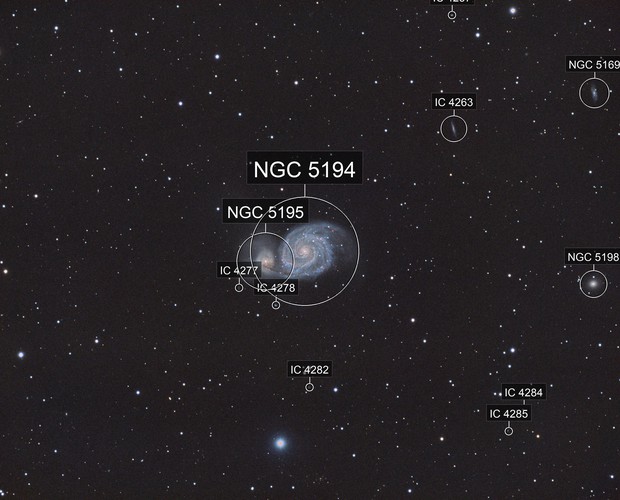 Like others, I have a long running love of the Whirlpool galaxy. I'm also sure that, as with many great attractions, it's completely unrequited. Messier 51 was the first elusive DSO that I tracked down, having to travel out to darker skies. It was the first "real" target that I tried with my first camera. I still revisit it, even if just for fun, every year that I have imaged.

This is the 2018 attempt. The final version used about 19 hours worth of sub-frames. I discarded another 11 hours worth of frames due to seeing and the occasional tracking issue or clouds. All the sub-frames were taken about two miles east of downtown Denver. For this year, I experimented in a couple of ways:

1.) Some of the data (about 86 sub-frames) were three-minute exposures out of a ASI-183 MM Pro camera attached to an SV-70t and (mostly) riding on a Takahashi EM-11. The other 220 sub-frames were four-minute frames taken with a QSI-690 and a Stellarvue SVQ-100. The SVQ rode on either a wounded Takahashi EM-200 or its replacement - a Software Bisque MyT. The image scale from both cameras was quite similar and they were easily combined in PixInsight with regular registration.

2.) I experimented a little more with sharpening tools. My friends will frequently tell me that I can push my images a little further, but I struggle finding the balance point that's right for me - bringing out details without breaking my own aesthetic preferences or enhancing parts of an image without breaking ties with the rest.

I'm generally happy with this image, but there is a bit of saturated star core mismatch on HIP 66004, the large neighboring blue star towards the bottom. I think the problem came when I merged the luminance channel into the RGB. The RGB version of the star was a bit brighter and then the replacement lightness that was generated with the luminance channel wasn't quite as bright - causing a bright ring surrounding a less-bright core. I've tried to play with masks and curves but am not talented enough for that approach, so I may take a shot at it with PixMath.

At this point, though, I wanted to get it off my desk because I've got other projects and the stars never sleep. Thanks for reading and clear skies to everyone. 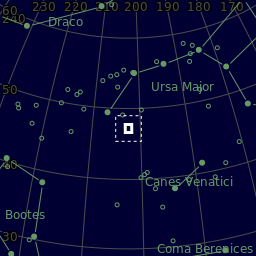