This image contains many interesting tiny galaxies, located in the constellation of Boötes. Arp 297 is the a quartet of small galaxies seen towards the center. Although it appears to be a quartet, it is really two pairs of galaxies at drastically different distances.

The largest galaxy to us at an apparent span of about 1 minute, NGC 5754 is the beautiful face-on galaxy at the center of the image. This galaxy is located 200 million light years away along with its companion, NGC 5752. These two are clearly interacting, as indicated by the extra long tidal stream almost 300,000 light years long which very faintly extends down and to the right. It also appears that the smaller galaxy has a reddish tint, which may indicate a starburst phase from the interaction.

Just to the right of this pair of galaxies, NGC 5755 is a wonderfully bizarre spiral galaxy with distorted arms and long tidal streams. It is located 450 million light years away along with the inclined spiral galaxy NGC 5753 to its right, although it is not clear that these two are interacting at this time.

Among the other galaxies in the image are the following:

- A pair of contrasting color galaxies (blue and yellow) to the left of center.

- A pair of galaxies similar in structure and color to the lower left of center.

- Most interestingly, to the right of center, a strange object which looks like a star superimposed over an irregular galaxy, or perhaps a star illuminating a reflection nebula. I could not find a description of this object in the literature.

This object pushes my setup a bit beyond its comfortable range in terms of image scale, but I can't help but to image fascinating new (to me) objects. 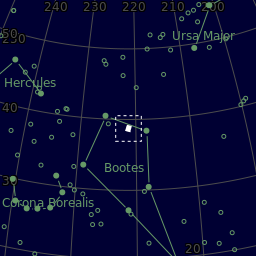