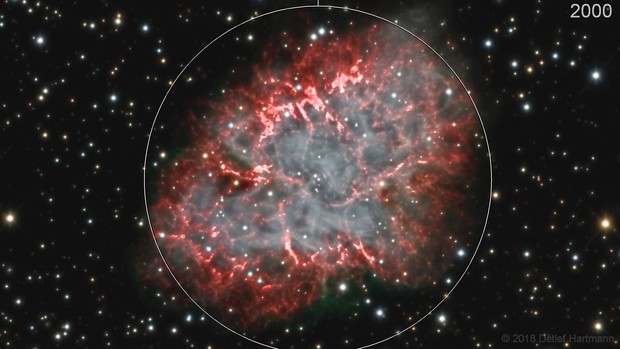 Based on my images for Crab Nebula (one decade time-lapse movie), I've done some simple science.

First, I have written a correlation algorithm to analyze the movements of each pixel over time. This resulted in 2 regression lines for each of the 2073600 pixels (x position over time, y position over time). The computing time (PixInsight, javascript) on an i7 (6 tasks in parallel) was 36 hours.

Based on these regression lines a virtual image of the Crab Nebula can be rendered for any desired year. The image quality is acceptable for the years 1950 to 2100.

Now I decided to calculate the Crab Nebula until the time of the explosion.

All the bright, red pixels were picked and calculated back in time. The year of the explosion was determined by the minimum of the sum of the intensities of all bright, red pixels. The result was year 1139, 85 years after the correct year 1054. But that's in consensus with many professional publications, an acceleration caused by the enormous power of the pulsar is assumed.

The location of the explosion was calculated as the barycenter of the light in a circle with a radius of 70 pixels (05h 34m 32.8s, + 22°00'55.6", J2000). To compare this position with the position of the pulsar, the proper motion of the pulsar from the Gaia DR2 must be considered. The calculated blast site is located only 6 arc seconds north of the pulsar. For the error estimation the proper motions of 23 stars were measured from a computed virtual picture for the year 1950 and a real picture of the year 2011. Comparing this 23 proper motions with the Gaia DR2 data gives a mean positional error of only 0.009"/year. For the year 1139, the error for the position of the explosion center is therefore 8 arc seconds.

The next step was the calculation of the maximum speed of the bright, red pixels, which reached the circle around the explosion center: The maximum speed was 0.159"/year (+/-0.014"). Now I had to use a value which I could not measure by my own: the maximum expansion speed of the nebula in our line of sight via a spectrum and the doppler effect. Using the commonly used 1500 km/sec. you get a distance to the Crab Nebula of 6500 +/- 600 light years. The angular size of the Crab Nebula today is app. 7.6' x 5.1', this corresponds roughly to 14 x 10 light years.

Explosion in: year 1139 (85 years missed! But in consensus with others)

The animated gif image shows the movements of 18444 bright, red pixels from century to century backwards in time. On the last picture (year 1139) the calculated explosion center is marked. The background image is a current Crab Nebula, each shifted by the appropriate proper motion of the pulsar. 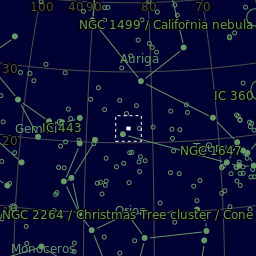