The Pleiades are a cluster of stars located in the constellation Taurus, nearly 450 light years away. For millennia, the seven sisters who gave their name to the constellation have fascinated the whole world. They have inspired all kinds of myths and legends in most cultures around the world.
The Pleiades are among the first stars mentioned in literature. They appear in Chinese texts dating from around 2350 BC. On the European continent, we find their trace in a poem by Hesiod (1000 BC) but also in the Iliad and Homer's Odyssey.
The constellation of the Pleiades has always served as a landmark for humanity: sailors used these stars to navigate; the peasants to determine the time of sowing and harvesting ...
According to Greek mythology, the Pleiades were seven sisters and children of Atlas (a Titan on whom Zeus had imposed to carry the world on his shoulders) and Pleioné, the patron deity of sailors. They were chased for five years by Orion, struck by their beauty.
Zeus, to save them, turned them into doves, and after their death they were placed in their sky. Cruel fate: after his death, Zeus froze Orion just behind the seven sisters so that he was eternally condemned to look at them without ever being able to approach them :

- Maïa (In Latin, the name Maïa means “mother” but is also synonymous with “nurturer”. She is the eldest of the 7 sisters. The Romans, who made her their goddess of spring, gave her name in May ).
- Alcyone (is the second of the seven sisters. Greek mythology made her the most powerful of all.)
- Asterope (is traditionally presented as the weakest of the seven sisters)
- Celeno
- Taygetus
- Electra (known to be the third brightest star in the constellation, gave birth to four children, among them Dardanus, founder of the city of Troy.)
- Merope (is the last star in the constellation to have been spotted by astronomers, its faint glow making it invisible to the naked eye. Nicknamed for this reason the "Lost Pleiad", it would have chosen to hide its face out of shame. to have married a mortal, King Sisyphus. According to other sources, Merope regretted having married a criminal, condemned to push to the top of a hill an enormous rock which came down systematically).

In Japanese culture, the Pleiades are known as "Subaru", synonymous with unity, to come together. However, the logo of the auto company of the same name only has six stars, since they are the only ones visible to the naked eye. 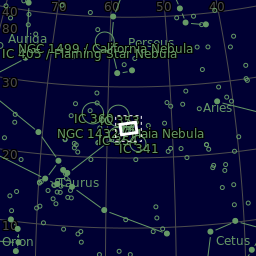