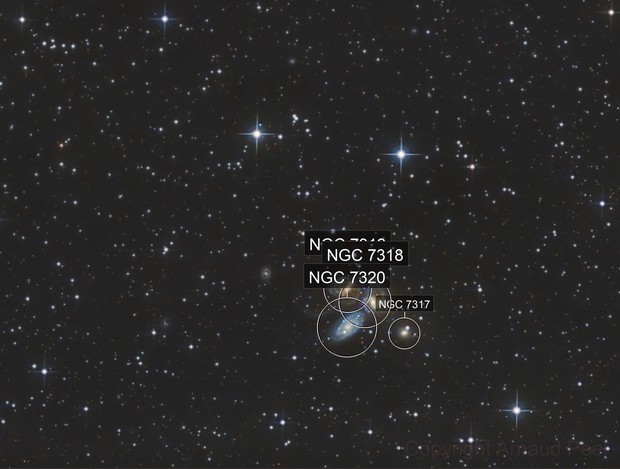 I started this project the 20 July wiyh L and RGB subs.
At that time , I did not know that my FW had not move a bit and stay all night in the Light filter position.
Later in july , I decide to have a look at the subs to integrate them in LRGB . Well, I was surprised not to find any color at the end of my process ... ;-)

In a way, I was lucky, not to have red , blue or green in excess but lights.

I had to wait till august to get back to the field , the 6 aund 7 august with RGB.
Finally , I had some time to process them .

NGC 7320 indicates a small redshift (790 km/s) while the other four exhibit large redshifts (near 6600 km/s). Since galactic redshift is proportional to distance, NGC 7320 is only a foreground projection[2] and is ~39 million ly[2] from Earth versus the 210-340 million ly of the other five.

A sixth galaxy, NGC 7320C, probably belongs to the Hickson association: it has a redshift similar to the Hickson galaxies, and a tidal tail appears to connect it with NGC 7319.

Four of the five galaxies in Stephan's Quintet form a physical association, Hickson Compact Group 92, and will likely merge with each other. Radio observations in the early 1970s revealed a mysterious filament of emission which lies in inter-galactic space between the galaxies in the group. This same region is also detected in the faint glow of ionized atomic hydrogen seen in the visible part of the spectrum as a green arc.

Two space telescopes have recently provided new insight into the nature of the filament, which is now believed to be a giant intergalactic shock-wave (similar to a sonic boom but traveling in intergalactic gas rather than air) caused by one galaxy (NGC 7318B) falling into the center of the group at several millions of kilometers per hour. 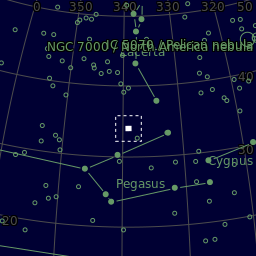