Barnard 150 is an elongated dark nebula, approximately 1° in length, in the constellation of Cepheus. It is sometimes referred to as the Seahorse Nebula, for obvious reasons. According to the APOD team, '...the dusty, obscuring clouds are part of a Milky Way molecular cloud some 1,200 light-years distant'.

Edward Emerson Barnard (1857 - 1923) was an American astronomer born in Tennessee who became Professor of Astronomy at the University of Chicago. He published his first catalogue of dark nebulae - 'On the dark markings of the sky with a catalogue of 182 such objects' - in The Astrophysical Journal; January, 1919. By 1927, Barnard’s catalogue listed 369 dark objects.

This was imaged between 12 September and 3 October 2018 from two remote imaging rigs in Spain that are owned and operated by Barry Wilson and me.

A total of 22 hours and 10 minutes exposure.

UPDATE 8 October 2018: Sigga very kindly sent me a link to some information about EE Barnard and his later (indeed, posthumous) two-volume "An Atlas of Selected Regions of the Milky Way" (1927). For those interested, here is the link: EE Barnard info

Description: Couple of minor things that I spotted - no change from last version other than that. 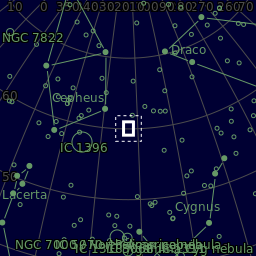