We finally got a clear, moonless night!

I'm still having guiding issues so I opted to go unguided again but decided to shoot a little longer (60 seconds) since it seemed like most of the subs were coming out ok. I boosted the gain to 175. The hope was to avoid some of the color blotchiness that the camera seems prone to. Between this and using 3 second flats and using flat darks and not using bias it seemed to help.

When I looked at the individual subs in SGP I could not see the nebula at all. I was worried that I wouldn't get anything useable though my mean readout was about 3800. This turned out to be a concern later as the integrated master was still fairly light in detail even after 7.5 hours. It was barely above the background level. Between this and the gradients this made it challenging to work with.

The light pollution gradient was almost impossible to eliminate. I ran four iterations of DBE and could still see blotches of color. At fist I thought this was the background blotchiness I had seen in earlier images but after staring at it for a while I realized it was in the foreground and was yellowish rather than green and magenta.

I opted to run SCNR to remove green and another iteration to remove 75% of the blue and suddenly the image cleared up. This definitely took a lot of color out of the stars but didn't seem to hurt the nebula too badly.

Before that the image was almost unstretchable, after it was fairly straightforward.

This was my longest integration yet with 455 minutes of data so I was hoping for an easier time of processing but it ended up being the hardest yet. I suspect that the light pollution in that part of the sky is what made this so challenging.

Then some final work in photoshop:

If anyone has any suggestions, please let me know. 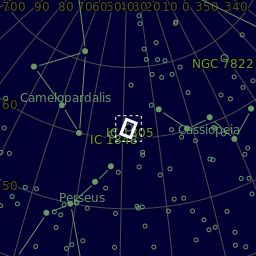