Why am I so excited about this image? At first glance, it seems like just a noisy star field. But upon closer inspection, you can see that the "noise" is actually a dwarf galaxy. And upon even closer inspection using the full resolution view, you can clearly see 3 globular star clusters within this galaxy.

The galaxy is the Fornax dwarf galaxy (PGC 10074), an elliptical dwarf spheroidal galaxy located almost half a million light years away in the southern constellation of Fornax. In absolute magnitude, it is the brightest dwarf galaxy orbiting the Milky Way. This galaxy was discovered in 1938 by Harlow Shapley.

The annotated image above identifies the 3 globular clusters - Fornax 2, 3 and 4. Each of these 3 clusters are less than 30 seconds in apparent diameter. Fornax 3, the brightest extra-galactic cluster in our sky at mag. 12.6, has been given a designation - NGC 1049. This globular cluster was discovered by John Herschel in 1835, long before the galaxy itself was discovered. Two other globulars, Fornax 1 and 2, are located further away from the center of the galaxy, off image.

Scientists have not yet explained how a single globular cluster (much less 5) could form in an old, relatively gas-poor galaxy. One possibility is that this galaxy captured an even smaller dwarf galaxy sometime in the past.

I don't know of another sky object where you can see star clusters outside of our galaxy so clearly. I feel a sense of wonder to be able to peer inside another galaxy in such detail. As much as I enjoy this object, I am surprised that I could not find it yet on Astrobin. Because of its southern declination (-35 deg) and the need for clear, sharp stars, I had to wait quite a long time for a night of excellent seeing.

Fornax 6 is an interesting object, appearing distinctly different from the other Fornax globular clusters. As recently as 25 years ago, this object was still believed to be a cluster. Recent work has shown that a number of the "stars" within this object are non-stellar. Fornax 6 is likely a compact group of very distant galaxies, far in the background. 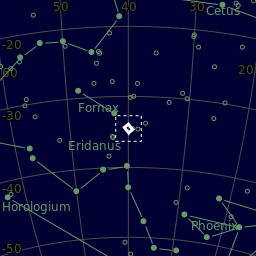