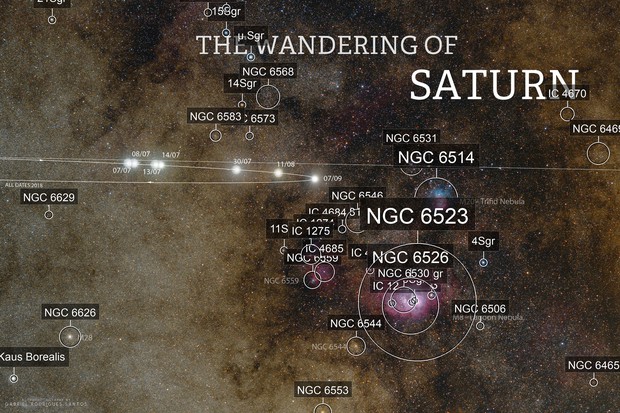 The Wandering of Saturn

THE WANDERING OF SATURN

"There was another kind of object in the sky, the wandering or vagabond stars called planets. Our nomadic ancestors must have felt an affinity for the planets. [...] They moved against the background of more distant stars. If you followed their apparent motion over many months, they would leave one constellation, enter another, occasionally even do a kind of slow loop-the-loop in the sky." [1]

In Cosmos, Carl Sagan puts it beautifully: planets are wanderers of the stars. The term planet's origin ties to history, astrology, science, mythology, and religion. The naked eye planets were regarded by many early cultures as divine, or as emissaries of deities. If you look up at night, there are great chances the brightest bodies you will see will be the planets. To the naked eye, they look just like bright stars. Early astronomers noted that some "stars" were not fixed - they moved across the sky. Greeks called them πλανῆται (planētai, or "wanderers") [2]. Explaining and precisely predicting this motion was a task for many astronomers and astrologers in Ancient times.

This wide field potrays part of 2018's motion of Saturn, in a beautiful Milky Way field. Saturn crossed the region in Sagittarius where great deep sky object lies: Lagoon Nebula, M8, and Trifid Nebula, M20 are the most prominent objects in the region, catalogued by Charles Messier in 18th Century. Some othre interesting objects lie in our Milky Way's plane: dark nebulas, the globular clusters M28 and NGC6544, in a dense starfield.
_____________________________

This image was captured in multiple sessions throughout 2018's Winter. The images from 7, 8 and 30/july; and 11/08 and 07/09 were caputred from my dark sky site in MG. The 13/07 and 14/07 images were captured during the 11º Encontro Brasileiro de Astrofotografia (Brazilian Astrophotography Meeting), in GO, some 1200km away. I find it interesting that the slightly different atmosphere conditions created some color variation in Saturn for each date.

Processing the data was not trivial. First all the images were combined used pixel rejection. That way, Saturn was considered an outlier, and got removed. This is the base background, with deeper integration. The individual sets from each night were then integrated separately. Each set consists of 1, 2, 4, 5, or 16 light frames of 120s, depending on the day. Each were calibrated with the respective calibration frames. Once registered, each "Saturn" frane was blended to the base image, which was then post-processed as usual. This way, the planet motion could be traced out. The labelling and the motion line (based on Stellarium software) were finally added. 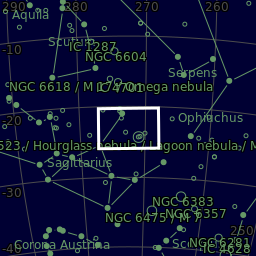