I was waiting all this time to image using the ZWO ASI1600 and Astro-Tech AT115 refractor. I was imaging with the camera for 7 months patiently waiting for the telescope to arrive. I finally get the telescope, use it to image M78, and then the fan on the camera stops working. I purchased it from OPT and so I sent it back to them where they will send it to ZWO for repair - fortunately it is under warranty. As a result, I will be using the modified Canon T3i/600D until the AS1600 is fixed.

The moon was up and I need time to reacquaint myself to the DSLR so I decided go after Messier 50 (M50), a.k.a. the Heart-Shaped Cluster which is open cluster located in the constellation Monoceros. Being named the Heart-Shaped Cluster I figured it was a good one to do on Valentines Day. M50 is approximately 3,200 light years from Earth to the east of Orion and is close to Sirius. It has an estimated age of 78 million years and is composed of numerous young, hot, luminous blue stars but also contains several yellow giants and a red M-class giant south of the cluster’s center (source: Messier Objects).

My first image of M50 was a whopping 22 min. total exposure from two years ago. This new image, 46 min., not as much time as I had hoped, is much better. The colorful field shows many blue and yellow giants and the star field is richer. I did very little star reduction for this image as I prefer lots of stars.

The biggest surprise to me and one of reasons I did not crop the image more was the bright nebular dust area in the lower right side. There was no data in Stellarium about this so I did some research on the Simbad database. What I discovered is it a a very rich area containing several radio sources, infrared sources, double stars, an open cluster, and a dark nebula. From what I am able to piece together the visible stuff in my image is an open cluster (IBP2002 CC04) and the interstellar matter (GS55 105). Other 'objects' in the area include:

I really liked this dusty area and I did not capture it two years ago or if I did I processed it out. This is worthy of further investigation preferably with someone who has a larger aperture telescope and smaller sensor with more detail - you know who you are!

Lastly, the stars in the corners of the image show elongation even though I am using the flattener. I had this problem when I first used the telescope with ASI1600 because I did not fave the sensor 55 mm away from the flattener. I thought DSLR sensors were supposed to be preset to 55 mm away, I will have to check into this. 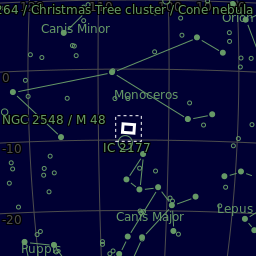