It has now done 2 years that me and a few friends did the acquisition of this data in the iTelescope.

We made a group of about 15 members to do image acquisition in the Southern Hemisphere and the Tarantula Nebula was one of our best works.

Now, I reprocessed these data but used a different technique to handle the luminance that resulted in a much sharper image. See, for example, in high resolution, the center of the nebula and see the central stars resolved. See also star clusters (NGC 204, NGC 2100, NGC 2050) with many stars resolved.

Also known as 30 Doradus or NGC 2070, the Tarantula Nebula, so called because it resembles a web, is a HII region (red/pink shows hydrogen) about 1,000 light-years in length, located in the Great Magellanic Cloud , a small satellite galaxy of the Milky Way, at an estimated distance of 170,000 light-years from Earth.

Despite the splendor of this image, we are facing an extremely hostile place for life. Here the stars form, evolve, and end their lives rapidly, often violently. The photograph contains stars at different stages of its evolution, some newly formed (about 2 million years old), still hidden in dense, dark gas bubbles, as well as the remnant of giants that ended their cycle in supernova explosions.

It is estimated that NGC 2070 is only 2 million years old and consists of more than 500,000 stars. Its core is filled with some of the most massive and young stars, warm stars carve the walls of gas with ultraviolet radiation, creating similar structures To pillars, valleys and ridges, as well as shock waves that will compress the surrounding material and, by the action of gravity, end up giving rise to new stars. 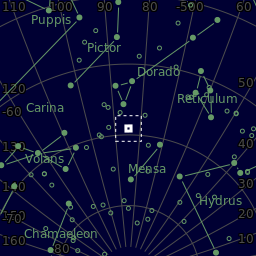