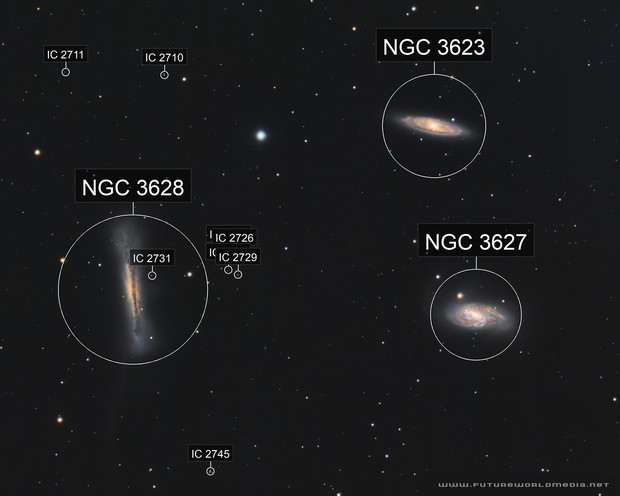 The Leo Triplet from a Red Zone

The Leo Triplet from a Red Zone

The Leo Triplet, or the M66 Group, is a group of interacting spiral galaxies located in the northern constellation Leo.

The group consists of the galaxies Messier 65, Messier 66 and NGC 3628, also known as the Hamburger Galaxy. The Leo Triplet lies at an approximate distance of 35 million light years from Earth.

Messier 66, the largest and brightest member of the Leo Triplet, is roughly 95 light years across. It has an apparent size of 9.1 by 4.2 minutes of arc and an apparent magnitude of 8.9.

Messier 65 has a visual magnitude of 10.25 and occupies an area of 8.709 by 2.454 arc minutes of apparent sky. It is an intermediate spiral galaxy, poor in dust and gas, and shows little evidence of star formation.

NGC 3628 is an unbarred spiral galaxy with a visual magnitude of 10.2. Seen edge-on, the galaxy occupies an area of 15 by 3.6 arc minutes and appears transected by a broad band of dust that stretches along its outer edge, hiding the young stars in the galaxy’s spiral arms.

The three galaxies in the M66 Group have all been affected by gravitational interactions with each other. This is evident in the deformed, drawn out spiral arms of M66 that are experiencing a high rate of star forming activity and in the warped, inflated disk of NGC 3628. With a prominent tidal tail consisting mainly of young blue stars, NGC 3628 seems to be the most affected of the three, while M65 appears to have suffered the least damage from the interaction. The tidal tail of NGC 3628 spans over 300,000 light years, but is very faint and does not always appear in images of the galaxy. 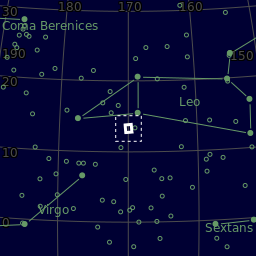