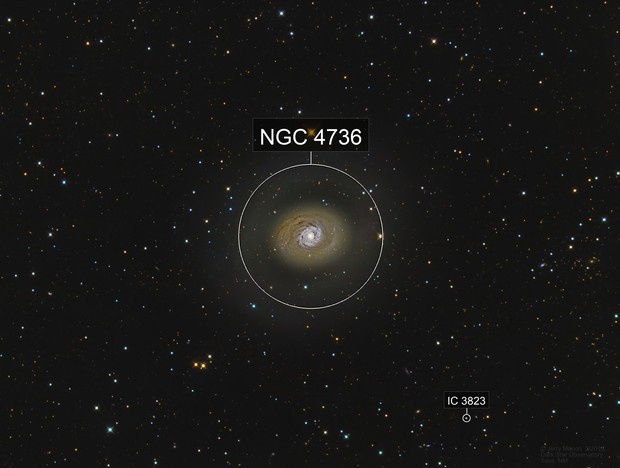 Images from the following two scopes (piggybacked) contributed to this image:
AG12+ASI1600MM at .70 asec/pix
TV127is+ASI183MM at .75 asec/pix.
They were all registered to the best Ha image taken on the AG12.

Messier 94 (M94), also known as NGC 4736, Cat’s Eye Galaxy or Croc’s Eye Galaxy, is a spiral galaxy in the northern constellation Canes Venatici (Hunting Dogs), some 15 million light-years away from us.

This galaxy was discovered by the French astronomer Pierre Méchain on March 22, 1781, and catalogued by Charles Messier two days later.

Astronomers estimate that Messier 94 has a mass of about 60 billion solar masses and is approximately 50,000 light-years across. It has a faint outer ring that extends for at least another 30,000 light-years.

In 1975, the French-born U.S. astronomer Gérard de Vaucouleurs listed the galaxy as a member of a nearby group of galaxies, the M94 Group (also known as the Canes Venatici I Cloud) – a group that contains 16 to 24 galaxies.

Within the galaxy’s bright ring new stars are forming at a high rate and many young, bright stars are present within it – thanks to this, this feature is called a starburst ring.

The cause of this star-forming region is likely a pressure wave going outwards from the galaxy’s core, compressing the gas and dust in the outer region.

The compression of material means the gas starts to collapse into dense clouds.

Inside these clouds, gravity pulls the gas and dust together until temperature and pressure are high enough for stars to be born.
(sci-news.com)