I was not expecting much from this given the very sizeable moon hanging in the east sky during the full shoot of this target. But this was about as far in the opposite direction from the moon as I could get. Even so, I still had some serious gradient to deal with, which I partially solved by cropping! Also, a new camera and uncertainty as to exposure setting, etc., offered me little hope as to great success. However, I was able to get a lot of subs, for sure. For me, that is. But one night out of the last 5 months, what is one to do!

In the end, I am pleasantly surprised, because all the indications from software assessment of the subs was for a very high sky background. I was surprised to even detect what I first thought was a faint IFN signal across much of the frame. I did not process this image in a way to preserve much of the IFN signal since I was more interested in the galaxies themselves. But I will elaborate more on this "IFN" below. In any case, I have to say that I am pleased with my new QHY268c. Given the chance, I will have to revisit this field of view with much darker skies. But first I need to deal with the tilt issue when the skies clear!

As I looked at my subs, stacked, and partially processed image, I noted a faint image of IFN-like signal across much of the field. Striking to me, was that this signal appeared to be somewhat circum-galaxial (a word?) around M81, as if M81 had cleared out a spot. If this is IFN, it could only be a coincidence. IFN is Milky Way stuff only. This whole area certainly has a lot of IFN, without a doubt. Very widefield images demonstrate that fact. But I actually believe that some of this signal may be galactic halo stars. I think that M81 is much larger in extent than the bright visible body of the spiral. I would also argue that M81 has much longer arm extensions than are easily seen. I offer that two blue stellar clusters one at 5 o'clock (listed as galaxy PGC28757) and a much smaller one at 10 o'clock (See my additional photo and near the center of the yellow circle) correlate with the extension of each of the two main galaxy arms. PGC28757 is presumed a satellite galaxy of M81. The smaller blue stellar cluster seems to be uncatalogued and, as far as I have seen, unnoticed, yet is interesting because it has a longer axis that seems to follow the contour of what one would imagine an extension of the lower M81 arm as should it wrap around and above M81. PGC28757 has no such symmetry, however, being closer to the end of the upper arm, it makes sense for it to be that much more substantial. As seen in other's photos, just beyond PGC28757, there is IFN-like density that is rather disrupted and may be a stellar halo arm extension that is gravitationally affected by M82. Whether PGC28757 is a true galaxy or part of M81's arm may be semantics, since it is believe that that all larger galaxies are the result of an accumulation of small galaxies. But a differentiating property might be an analysis of PGC28757's rate of motion relative to M81. If it is found to be rotating in a manner consistent with the rest of the galaxy at that distance from the center, then one has to consider it already merged or just a clumpy part of the existing arm. This in contrast to the Milky Way's own LMC and SMC, which are now known to be zipping past us at too high a speed to ever merge with the Milky Way.

For QHY168c users: Mode 0, gain 28, Offset 10 @ 90 seconds. I consider this a somewhat Low Dynamic Range object, which may seem counter since these are galaxies and they do get bright.
But I did not saturate much on these 90 second subs. Seemed to work well, considering the big moon.

Description: Here is the slightly cropped unmolested view. The other revision has the highlighted area discussed in the text. 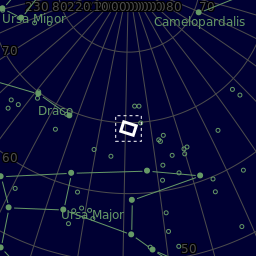