Initially, I did not plan to shoot this mosaic, it so happened that after shooting the Heart and starting to shoot the Soul, I realized that there was a sufficient overlay of frames to assemble the mosaic.

The Heart Nebula, IC 1805, Sharpless 2-190, lies some 7500 light years away from Earth and is located in the Perseus Arm of the Galaxy in the constellation Cassiopeia. This is an emission nebula showing glowing ionized hydrogen gas and darker dust lanes.

The nebula's intense red output and its configuration are driven by the radiation emanating from a small group of stars near the nebula's center. This open cluster of stars known as Melotte 15 contains a few bright stars nearly 50 times the mass of our Sun, and many more dim stars that are only a fraction of our Sun's mass.

This complex is the eastern neighbor of IC1805 (Heart Nebula) and the two are often mentioned together as the "Heart and Soul".
(c) Wikipedia 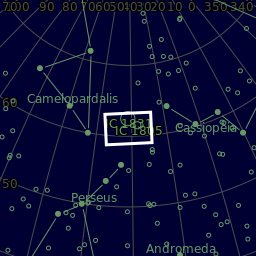