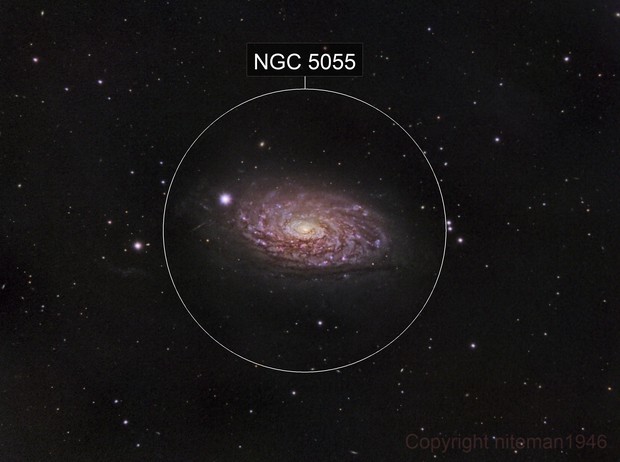 Messier 63 or M63, also known as NGC 5055 or the seldom-used Sunflower Galaxy, is a spiral galaxy in the northern constellation of Canes Venatici. M63 was first discovered by the French astronomer Pierre Méchain then later verified by his colleague Charles Messier on June 14, 1779. In the mid-19th century, Anglo-Irish astronomer Lord Rosse identified spiral structures within the galaxy, making this one of the first galaxies in which such structure was identified.
This galaxy has a spiral shape with no central bar feature and moderate to loosely wound arms. Each arm wraps 150° around the galaxy and extends out to 13 kly (4 kpc) from the nucleus.
M63 is an active galaxy with a LINER nucleus. This displays as an unresolved nuclear source wrapped in a diffuse emission. The existence of a super massive black hole (SMBH) at the nucleus is uncertain; if it does exist, then the mass is estimated as (8.5±1.9)×108 M☉.
The distance to M63, based upon the luminosity-distance measurement is 8.99 Mpc (29.3 Mly). M63 is part of the M51 Group, a group of galaxies that also includes M51 (the 'Whirlpool Galaxy').
In 1971, a supernova with a magnitude of 11.8 appeared in one of the arms of M63. It was discovered May 24, 1971 and reached peak light around May 26. [Source: Wikipedia]

Processing was done with PixInsight, following (for the most part) kayronjm's tutorial of Feb. 24th, 2013. Background was a problem, but detail and color came out OK (see below). North is up and this is a slight crop due to the misalignment accumulation from the different filters and times.

COMMENTS:
Luminance continues to suffer from optical reflections, more than likely caused by the city lights from Burleson, less than "stellar" skies, and old optics. Since the last image I was able (kinda) to create a limited number of "Twilight" flats for the Luminance. While not eliminating the undesirable feature, the new flats did reduce it. So, a bit better, but it's still there if you look for it.

EDIT April 19, 2019:
The first image (the gold one) was processed in Pixinsight and used no color correction. The “Gold” cast was the result. The second image (more red or magenta) was done using Pixinsight’s Color Correction process and selecting the Galaxy method. My main reason for adding this comment is, without it I’ll likely lose track of what I did.