I'd like to thank Andrea Alessandrelli for challenging us to image these two wonderful galaxies "with the Darkest Skies, The Sturdiest Mounts and the Beastiest Scopes." (-;

Someone needs to post a decent picture of these galaxies

The darker skies really help expose the faint arms and colors you see here. This is all photometric color calibrated in PI. I believe I can extract a bit more with 12+ hours of luminance, but the results would be very subtle (i.e., slighty more detail in the arms).

"...two spiral galaxies make a photogenic pair, found within the boundaries of the northern constellation Draco. Contrasting in color and orientation, NGC 5965 is nearly edge-on to our line of sight and dominated by yellow hues, while bluish NGC 5963 is closer to face-on. Even in this cropped snapshot the scene is invaded by other galaxies, including small elliptical NGC 5969 at the upper right. Brighter, spiky stars in our own Milky Way are scattered through the foreground. Though they seem to be close and of similar size, galaxies NGC 5965 and NGC 5963 are far apart and unrelated, by chance appearing close on the sky. NGC 5965 is about 150 million light-years distant and over 200,000 light-years across. Much smaller, NGC 5963 is a mere 40 million light-years away and so is not associated with the edge-on spiral. Difficult to follow, NGC 5963's extraordinarily faint blue spiral arms mark it as a low surface brightness galaxy."

Reference image taken with similar equipment by Stephen Leshin in 2012... 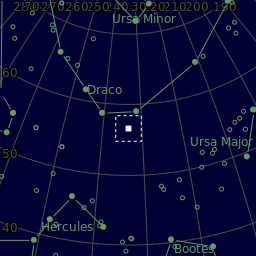