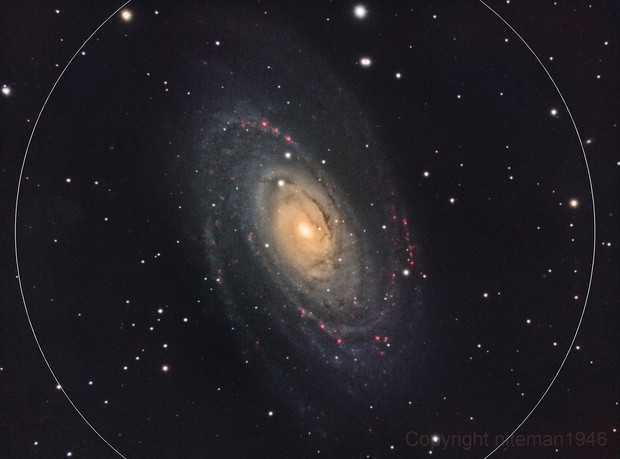 Messier 81 (also NGC 3031 or Bode's Galaxy) is a spiral galaxy about 12 million light-years away, in the constellation Ursa Major. The galaxy's diameter of 90,000 light years is about half the size of the Milky Way. Due to its proximity to Earth, large size, and active galactic nucleus (including a 70 million sun supermassive black hole), Messier 81 has been studied extensively by professional astronomers.

Messier 81 was first discovered by Johann Elert Bode on December 31, 1774, and is sometimes referred to as "Bode's Galaxy". In 1779, Pierre Méchain and Charles Messier reidentified Bode's object, and listed it in the Messier Catalogue. Messier 81 is located approximately 10° northwest of Alpha Ursae Majoris along with several other galaxies in the Messier 81 Group.

Messier 81 and Messier 82 (not shown) can both be viewed easily using binoculars and small telescopes. Telescopes with apertures of 8 inches (20 cm) or larger are needed to distinguish structures in the galaxy. Its far northern declination makes it generally visible for observers in the northern hemisphere.

Most of the emission at infrared wavelengths originates from interstellar dust. This interstellar dust is found primarily within the galaxy's spiral arms, and it has been shown to be associated with star formation regions. The general explanation is that the hot, short-lived blue stars that are found within star formation regions are very effective at heating the dust and thus enhancing the infrared dust emission from these regions.

Only one supernova has been detected in Messier 81. The supernova, named SN 1993J, was discovered on 28 March 1993 by F. García in Spain. At the time, it was the second brightest supernova observed in the 20th century.

Messier 81 is the largest galaxy in a group of 34 galaxies located in the constellation Ursa Major. Fairly near to Earth, it makes this group and the Local Group, containing the Milky Way, relative neighbors in the Virgo Supercluster. [Source: Wikipedia]

COMMENTS:
I used the technique presented on Harry's Astroshed site for adding the Halpha images to the red images. You can see in the finished product where the isolated Hydrogen Alpha features are prominent in red.
The horizontal striations (lines) towards the lower part of the galaxy center are real. It is believed they resulted from gravitational effects from M82.