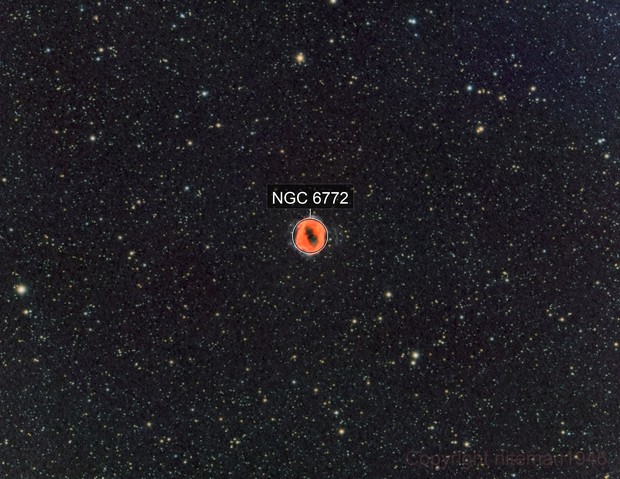 This is NGC 6772, a planetary nebula n the constellation of Aquila. (Source: JIM SOLOMON)
NGC 6772 is a small planetary nebula in Aquila. Like other planetary nebula, it represents the remnant of a dying star that is blowing off its outer layers. It is dim (magnitude 12.7) and small (70 x 56"), requiring dark skies, a large aperture to collect scarce photons, steady skies, and precise tracking. (Source: STARDOCTOR)
NGC 6772 is a planetary nebula in the direction of the constellation Aquila . The object was discovered by astronomer William Herschel in 1784 using an 18.6-inch aperture reflector telescope . Due to its moderate apparent magnitude (+12.7), it is visible only with amateur telescopes or higher equipment. (Source: PORTUGUESE WIKIPEDIA)

Mark's note: Not a lot has been written about this object. The above is all I could located on the web.

Processing was done with PixInsight, following (for the most part) kayronjm's tutorial of Feb. 24th. Only L was used to develop the Luminance image. R, G and B were collected for the color mix. Narrow band Ha images were combined with the RED subs to make the final red color.
North is to the right (I think), and this is a slight crop due to the misalignment accumulation from so many different filters and times.

COMMENTS:
I am not very pleased with the outcome. I used the technique presented on Harry's Astroshed site for adding the Halpha images to the red images. No knock on Harry; his technique works well and I've used it to success on previous objects. The (my) problem is that the image is dominantly Ha and extremely lightly RG and B. So they contribute very little.
Nevertheless, I was able to show the faint nebula surrounding the bright orangish red ring.
Also, there is a noticeable blue gradient on the upper right hand corner, which I thought I had removed during processing. 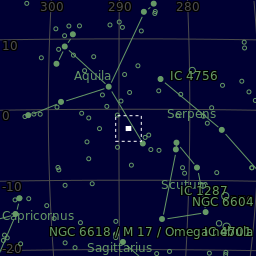