SH2-174 (Sharpless 174) ranks as the most northern Sharpless object at 81 degrees north.

SH2-174 / LBN598 is actually a Planetary Nebula. The best part of this target is the reflecting dust clouds surrounding it. SH2-174 is very dim and requires a lot of integration time. It does not have much striking structure either. The Sulphur-II channel is especially important for providing a few structural details.

This project started a year ago. On and off, it almost got abandoned because of the not-so-stellar narrowband data - and the almighty NSG script can't clean the gradients. Good thing is, SH2-174 is always there around the Polaris, even in the Galaxy season. That's why it is always used as the "filler" target when there are no other targets available for imaging. 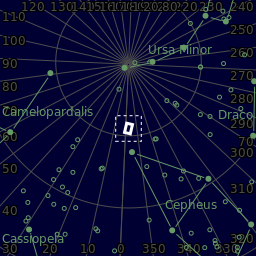