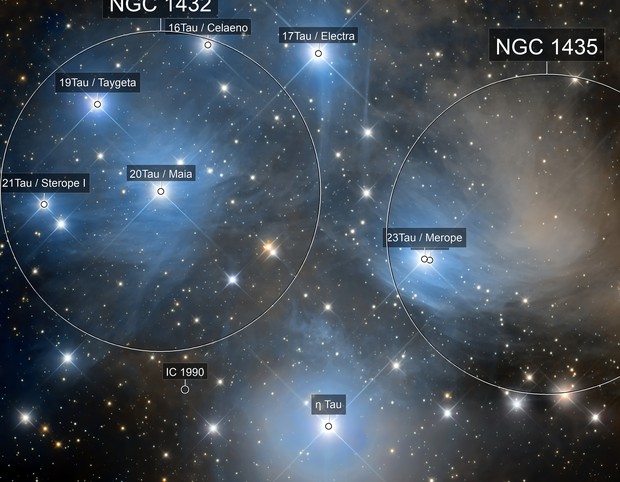 Known from the earliest of antiquity and mentioned three times in the Bible, the "Pleiades" or the "Seven Sisters," is inarguably the night sky's most beautiful star cluster. Illuminating the autumn sky, it seems to signify a cool, refreshing end to our hot Texas summer!

But cool they are not. Among some of the hottest stars in the sky, these blue beauties shine brightly from their position approximately 440 light years away. Of the nine brightest stars in the cluster, all B-class in spectrum, their grouping is special for a couple of reasons.

First, not many clusters like this are surrounded by so much dust. In the case of M45 (the Messier catalog designation for the cluster), this dust is easily seen because it is reflecting back all that blue starlight into our eyes. The swirls and streaks of dust seem astonishing to us, as if they've always been a part of the Pleiades landscape. However, most astronomers believe that the dust is just part of the interstellar medium and that the cluster if just passing through. I am not sure I agree with that assessment, as the dust appears captured up within the Pleiades neighborhood without hope of escape. Even so, thankfully for us, we get the chance to see their meeting!

Second, B-Class stars are relatively rare in the night sky, comprising less than 1% of stars in the main-sequence. They typically only occur in clusters, known as "OB Associations," having been birthed not too long ago (around 100 million years) within a giant molecular cloud of abundant, hot gases. So much in fact that the stars formed with such gravitational mass that their hydrogen is burning away at a very fast rate, enough to cause these stars to have relatively short life-cycles (perhaps 500 million years) as compared to something like our own Sun (which is already around 4.6 billion years old).

Therefore, it should be no surprise that THIS cluster would be so striking...its stars' energetic natures (their fast fusion rate) make them very luminous from an absolute standpoint. Coupled with their relatively close distance to us, their relative magnitudes are rather bright from our perspective. Of the nine brightest stars, they range from magnitude 2.9 to 5.6, making them a good gauge for astronomers to measure the transparency/darkness of their own skies.

So who are the "Seven Sisters"? In ancient Greek myth, the sisters were the daughters of Altas and Pleione, stars within M45 that are not shown in my image. Their off-spring, the "seven sisters" are arrayed here in all their splendor. Note that Asterope is actually two stars, a fact that would have been hidden from the ancient Greek observers, as they would appear as a single star to the naked eye due to how close together the relatively faint stars actualy are.

(Interesting fact: Most of the stars you see in the night sky are actually TWO stars, known as binaries. They usually consist of one large and one small star, the latter of which, typically, cannot be easily detected because of how close they are to each other.)

So where are the stars going? As they were birthed together, they are moving in mostly the same direction, as sisters like to do, toward the "feet" of Orion from our sky perspective. Orion, "the hunter," in Greek mythos, is said to be protecting the sisters from Taurus, "the Bull." So perhaps it's smart of the girls to be headed in that direction.

​But I wonder if they realize that the bull is actually standing between them and their rescuer in the night sky? 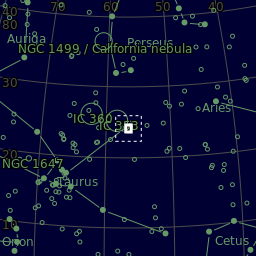