M1 - The Crab Nebula in Bicolor

Modern understanding that the Crab Nebula was created by a supernova traces back to 1921, when Carl Otto Lampland announced he had seen changes in its structure.[5] This eventually led to the conclusion that the creation of the Crab Nebula corresponds to the bright SN 1054 supernova recorded by Chinese astronomers in AD 1054.[6] There is a 13th-century Japanese reference to this "guest star" in Meigetsuki.[7][8]

The event was long considered unrecorded in Islamic astronomy,[9] but in 1978 a reference was found in a 13th-century copy made by Ibn Abi Usaibia of a work by Ibn Butlan, a Nestorian Christian physician active in Baghdad at the time of the supernova.[10][11]
------------------
I was just able to get some OIII data before the holidays and poor Northern California winter weather kicked in.

Here are some Pixinsight processing details if you are interested:

Blink on both Ha and OIII to find really bad frames

Subframe Selector on both Ha and OIII

Weighted Batch Preprocessing with Nebula setting for Ha and OIII

Dynamic Crop with OIII as reference

DBE on Ha and OIII

Pixelmath to normalize Ha to OIII (instead of Linear Fit)

Photometric Color Calibration - I used Pixelmath to combine Ha with OIII in an attempt to get it as close to natural (RGB) as possible. PCC was able to take it the rest of the way.

RGB Working Space - .33 on each channel

Deconvolution - tried several iterates on a preview until the deconstructions was not to strong settled at 0.0008 Global Dark and 125 iterations

Used HT to try to match histograms of RGB with Lum.

HDRMT to bring out some detail in the nebula

Save to 16bit Tif 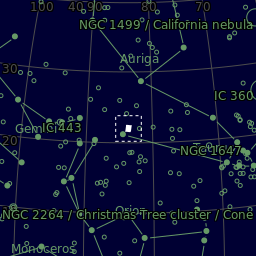