This object is a small galaxy cluster, Hickson 68, located primarily 90 million light years away in the constellation of Canes Venatici at a declination of +40 degrees. This cluster of 5 NGC galaxies lies within a diameter of 10 arc-minutes. Hickson 68 is the 3rd brightest cluster (magnitude 11.

in the Hickson catalog. My collection of Hickson images is here.

“By compact group, we mean a small, relatively isolated, system of typically four or five galaxies in close proximity to one another. Such groups do not necessarily form a distinct class, but may instead be extreme examples of systems having a range of galaxy density and population. Hickson adopted a relative magnitude criterion, selecting systems of four or more galaxies whose magnitudes differ by less than 3.0. A distance independent (to first order) compactness criterion was employed: mubarG < 26, where mubarG is the mean surface brightness of the group calculated by distributing the flux of the member galaxies over the smallest circular area containing their geometric centers. To avoid including the cores of rich clusters, an isolation criterion was necessary so as to reject the group if a non-member galaxy, not more than 3 mag fainter than the brightest member, occurred within three radii of the center of the circle. (A non-member galaxy is a galaxy which if included in the group would cause the group to fail one or more of the selection criteria.) From a search of 67% of the sky (all the POSS prints), and using magnitudes estimated from the POSS red prints, exactly 100 groups were found satisfying these criteria.”

In this image, the largest galaxy of the cluster to our apparent view is NGC 5350, a grand design barred spiral seen just above and left of the bright 6.5 magnitude orange star. This galaxy is about 70,000 light years in diameter. I love the detailed disk structure, including star clusters and wonderfully defined arms.

Surprisingly, I don’t see much sign of interaction amongst these Hickson 68 galaxies.

The graceful grand design spiral galaxy UGC 8841 is photobombing the Hickson 68 group, sneaking in at the lower left edge of the image. 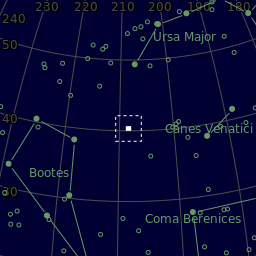