We finally come to the end of my series on Cep OB2. If you haven't already, and want to understand the background that has led to this image, consider studying the first three parts in this series:

Part I: The Complexity of Phenomena. IC 1396 and the Power of Stars.

This image is a two panel mosaic, stretching from Sh2-140 in the west to NGC7160 to the east. The 19 hours of usable integration--split evenly between the two panels--was culled from about 24 hours of data, taken between June 23 and July 6.

The main attraction is NGC7160. This nondescript little cluster to the far right of the mosaic is the source of the interesting phenomena in the larger Cepheus bubble we have studied in this series. In short, the OB stars of this cluster created an initial expanding shockwave of compressed gas some 7-10 million years ago. Many of these "old" OB stars have since disappeared, probably through supernovae, the remaining stars being the small cluster found today in NGC7160. Visually, of course, NGC 7160 does not seem very interesting. For a closer view, @Gary Imm did a nice image of this cluster in 2019.

In the shockwave of compressed gas of those older OB stars, the stars of the current Cep OB2 association were formed. These 51 stars themselves are now likewise ionizing local H2 and generating compressed gases that will lead to the formation of a third group of OB stars in the region.

The Sharpless objects in the region, notably Sh2-129, Sh2-131, Sh2-134 and Sh2-140 are the major sites of this third wave of star formation. See the map in Revision B to better understand these emerging star formations.

Looking to the west in the mosaic, we see Sh2-140, a much more visually interesting structure. Just like the other images in the series, the "ridgeline" at the left of the nebula is the location of a group of protostars that are resisting the shockwave of the two 'nearby' Cep OB2 association stars.

The closest of these two OB2 association stars is HD 211880. It is a Class B0.5V C star and appears close to the nebulosity as an apparent doublet. It may only be visible to you when viewing the image in full resolution, since it is currently not listed in the plate-solving.

The real "mover and shaker" in the region, though, is the Class O9Ib C star, 19 Cep (HD 209975). It is located in the center bottom of the image. Like Lam Cep in Part II, this star has largely burned off most of the surrounding H2 with its UV emissions. Only a few areas of compressed gas and dust remain nearby, like Sh2-140.

If you are into the science, the seminal article on the origin and evolution of the area was written in 1998. The researchers used infrared imaging based on carbon monoxide (CO) emissions. You can read the original article here. Incidentally, some of the stellar classifications in the original article have since been revised. A good example of this is HD 202214 (from my Part III image) which is now considered to be a Class O9.5IV C star.

One of the most interesting features of the image besides the OB2-related features, is the presence of VV Cephei (HD 208816). VV Cephei is an eclipsing binary composed of a red supergiant and a companion blue star (together, Class M2epIa-Iab+B8:eV C). The supergiant is one of largest stars in galaxy, measuring in at an estimated 1,000 R☉ and is feeding material into the smaller, hotter B star which, itself, has a large circumstellar disk.

The reflection nebula and it's accompanying star (GN22.12.3 and HD 211242, respectively) near Sh2-140 are not part of the Cep OB2 dynamic. It is important to remember that we are viewing a 2D image of 3D space! Other notable features of the image include:

This concludes my Cepheus OB2 Project. I considered including Sh2-133 and Sh2-137, but given their faintness and lack of identifiable morphology, decided they would add little more of value to the study. There is also an unnamed mass of fairly dense IR activity just south of Sh2-140 that might be worth imaging, but it would probably result in a rather formless and uninteresting visual image and wouldn't contribute anything new to the project. I have included in Revision C the list of Cep OB2 Association stars after the discussion about faint O2 emissions in the large Class O stars. Perhaps you will point a scope for 100 hours at each of them to see if something lurks undiscovered! One last note, if you have a lot of FL, I encourage you to try Sh2-140. It has some fascinating detail not visible at this scale.

Thanks for taking the time to look and especially to read and learn; extended thanks for taking the time to make comments. They are always appreciated and taken to heart. My biggest thanks are reserved for those who have stayed with me for the entire series and provided me with encouragement and support through the process with their public comments and private messages! 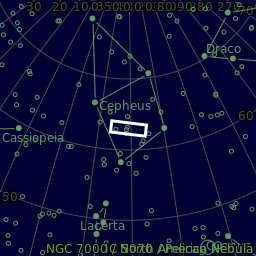