My goal was to get very detailed in the center, thus only keeping the very best subs over a 10-day dark period.

Skies were very dark (21.7 SQM) so 2-hours of each R, G and B (rather than my normal 3 hours) provided very good color and low noise.

"NGC 4565 (also known as the Needle Galaxy or Caldwell 38) is an edge-on spiral galaxy about 30 to 50 million light-years away in the constellation Coma Berenices.

NGC 4565 is a giant spiral galaxy more luminous than the Andromeda Galaxy.Much speculation exists in literature as to the nature of the central bulge.

In the absence of clear-cut dynamical data on the motions of stars in the bulge, the photometric data alone cannot adjudge among various options put forth. However, its exponential shape suggested that it is a barred spiral galaxy.

NGC 4565 has at least two satellite galaxies, one of which is interacting with it. It has a population of roughly 240 globular clusters, more than the Milky Way." 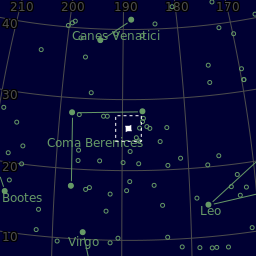