NGC 4725 is an intermediate barred spiral galaxy with a prominent ring structure, located about 40Mly away in Coma Berenices. It was discovered by Herschel on April 6, 1785. At a magnitude of 10.1 and an apparent size of 9′.77 × 6′.76 it's a good object for imaging at longer focal lengths. Its spiral arms show evidence of distortion and it is suspected that NGC 4725 is interacting with NGC 4747 a nearby spiral galaxy that is not visible in this field of view. The pair have an angular separation of 24′, which corresponds to a separation of only 370 kly. The literature reports a tidal plume extending from NGC 4747 toward NGC 4725; although, I was not able to see any evidence of it in my images. NGC 4725 is thought to be a type 2 Seyfert galaxy with a supermassive black hole at its core. It has a morphological classification of SAB(r)ab pec, indicating a peculiar, weakly-barred spiral galaxy (SAB) with a complete ring surrounding the bar (r) and somewhat tightly-wound spiral arms (ab). It is reported to have a double-barrel, a feature found among about a third of all barred spirals but I can't make out the double bar in my image, so it must be subtle. The ring structure of the galaxy is a region of star formation. It is offset from the galactic center and displays non-circular motion. The galactic plane is inclined by approximately 46° to the line of sight from the Earth.

NGC 4712 is a bit of more of mystery. NASA's redshift data indicates that it lies at a distance of about 200 million light-years. If that value is correct, the actual diameter would be 155,000 light-years, which would be 1.5 times the size of NGC 4725. However, the high apparent brightness and the fact that the arms and nuclei can be clearly resolved suggest that this galaxy may be considerably closer. There doesn't seem to be any direct evidence (such as a tidal stream) to indicate that it might be connected to NGC 4725 as a satellite. Could the red-shift data be off? I didn't look really hard, but I couldn't find any references that settled on a firm distance for NGC 4712.

It has been an extraordinarily unproductive year for my C14 out at DSW. I run it every clear night and yet this is only the second image that I've been able to produce during 2021. Back in February I started what I though would be a quick project to image M104. It's so bright that I figured that all I'd need would be 5 good nights and then I'd move on to another, more interesting project. I wound up spending nearly 100 hours gathering M104 data and out of that entire pile of data I only produce a few useable subs--maybe only 8-10. Combining really bad seeing and wind with broken equipment at the observatory, fog, clouds, and the moon, I just couldn't catch a break. The image yield was so low that I began to make plans to visit the observatory to see what was wrong with the scope.

I finally gave up on M104 as it sank into the West and pointed the scope on NGC 4725. Bingo, the seeing improved and the image quality went WAY up! The conditions were so good that I could see right away that there wasn't anything wrong with the scope. Still as I blinked through my data stack, I found tremendous inconsistent image quality. It was obvious that clouds were often occulting the object as I imaged. I had strange gradients, images that were clearly under exposed, and diffuse glow indicating possible dew or high thin clouds. I probably gathered around 80 hours of data to get enough acceptable subs to finish this image.

Even after carefully culling out a lot of junk, I still wound up with pretty strong gradients in each of the stacked channels, which is highly unusual. I also had a few frames with LOTs of StarLink satellite trails. They were so dense that that's what they had to be! Fortunately, the stacking filters took care of most of the satellite trails. I might have missed one but it's so faint and hard to see that I'm not too worried about it.

I had a couple of goals with this image. First, I wanted to try to reveal as much detail in the star formation ring as I could and second, I wanted to show the color of the outer arms. Most images that I've seen of this galaxy tend to lose color in the outer regions due to what it takes to control the background saturation. As this image shows, there is actually a fair amount of color in the outer arms. I must have made 20 different masks as I worked on getting the colors to show through! Having over 36 hours of data helped a lot to control the noise throughout the processing effort. In order to reveal detail, I applied a gentle deconvolution along with a little bit of masked bandwidth (AKA Fourier) filtering on the tiny dust lanes. Successive minor application of LHE at different image scales helps to give a slight 3D look to the larger arm structure and further enhances small detail contrast.

Alas, now that I'm ready for a new object, the observatory roof is broken again. Hopefully they'll get it fixed ASAP, which will probably happen just in time for monsoons. Nothing is easy! But that's why this hobby is so much fun...right?

As always, C&C are welcome so let me know how it works on your monitor. 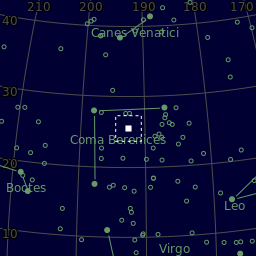