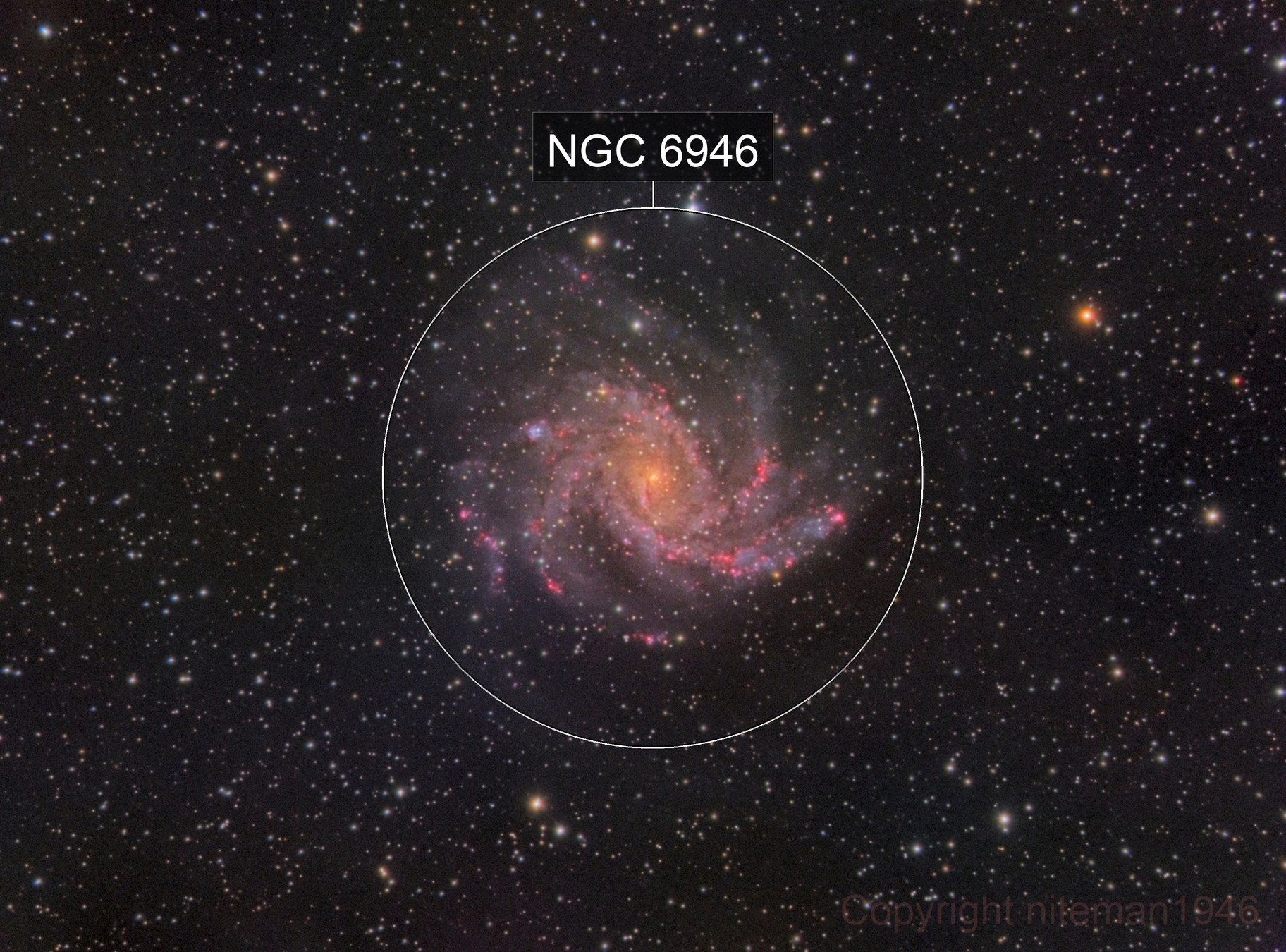 NGC 6946 (AKA the Fireworks Galaxy or Caldwell 12) is a face-on intermediate spiral galaxy with a small bright nucleus, whose location straddles the boundary between the northern constellations of Cepheus and Cygnus. Its distance from Earth is about 25.2 million light-years, similar to the distance of M101 (NGC 5457) in the constellation Ursa Major. Both were once considered to be part of the Local Group. but are now known to be among the dozen bright spiral galaxies near the Milky Way but beyond its confines. NGC 6946 lies within the Virgo Supercluster.
Discovered by William Herschel on 9 September 1798, this well-studied galaxy has a diameter of approximately 40,000 light-years, about one-third of the Milky Way's size, and it contains roughly half the number of stars as the Milky Way. It is heavily obscured by interstellar matter due to its location close to the galactic plane of the Milky Way, with a dimming of ~1.5 magnitudes. Due to its prodigious star formation it has been classified as an active starburst galaxy.
Various unusual celestial objects have been observed within the galaxy. This includes the so-called 'Red Ellipse' along one of the northern arms that looks like a super-bubble or very large supernova remnant, and which may have been formed by an open cluster containing massive stars. There are also two regions of unusual dark lanes of nebulosity, while within the spiral arms several regions appear devoid of stars and gaseous hydrogen, some spanning up to two kiloparsecs across. A third peculiar object, discovered in 1967, is now known as "Hodge's Complex". This was once thought to be a young supergiant cluster, but in 2017 it was conjectured to be an interacting dwarf galaxy superimposed on NGC 6964.

Ten supernovae have been observed in NGC 6946 in the last century.  For this reason NGC 6946 in 2005 was dubbed the "Fireworks Galaxy", a name becoming increasingly popular. NGC 6946 has an unusually high rate of supernovae production compared to our Milky Way galaxy’s rate of just one supernova event per century. This is the more remarkable as our Galaxy comprises twice as many stars.
On 27 September 2004, the Type II supernova SN 2004et was observed at magnitude 15.2 and rose to a maximum visual magnitude of 12.7. Images taken several days earlier revealed no such star, indicating destruction of the star occurred on the 22 September. The progenitor of SN 2004et has been identified on earlier images –– only the seventh time that such an event was directly identified with its host star. The red supergiant progenitor had an initial mass of about 15M☉ in an interacting binary system shared with a blue supergiant.
During 2009, a bright star within the galaxy NGC 6946 flared up over several months to become over one million times as bright as the Sun. Shortly thereafter it appeared to vanish. New observations with the Hubble Space Telescope strongly suggest that the star did not survive, although a faint trickle of infrared light emanates from where the star used to be. The remnant glow probably comes from debris falling onto a black hole that formed when the star died. This potential black hole-forming star is designated N6946-BH1. Based on UBVR photometry, the star was determined to most likely be an early G-type supergiant star.
In May 2017, supernova SN 2017eaw was first observed to be 12.8 magnitude in the northwest region of the galaxy and light curves obtained over the next 600 days showed that it was a Type II-P. The progenitor was determined to have been a ~ 15M red supergiant before going nova.

Processing was done with PixInsight, following (for the most part) kayronjm's tutorial of Feb. 24th from several years back. Only Lum was used to develop the Luminance image.
R, G and B were collected for the color mix.
Ha was combined with RED to accentuate the star burst activity in the spiral arms.
North is up (pretty sure, or not), and this is a very slight crop due to the various movement of different subs.

COMMENTS:
As with previous targets, I see I’ve imaged this one previously. Starting in 2011, then 2012, and now. Using the Ha to accentuate the red starburst zones came out well. I think the latest is pretty good.

While doing some “Flats” recently using daylight and a diffuser, the Atik camera cooler kept kicking out. This was during a couple of hot days and taxed the limit of the camera. Thus I payed more attention during imaging and saw that at the start, the cooler was running at around 95% power. This may be a problem going forward. 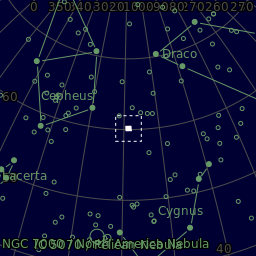