Last weekend got a clear night and decided to take first light with ZWO ASI533MC Pro. The Moon was quite near to full, but still was giving around 1h 30 minutes darkness - good chance to make some tests of the ZWO Duo-Band Filter too. Additional performed test was the usage under the skies of APT's support for the ZWO native driver

As target picked-up an object that is well known with idea that can show the performance of the camera itself. BTW I have never imaged the Rosette so far, and it is still in my list for a narrowband attempt

The first revision is comparison of single frames, auto stretched - one when the Moon was high above the horizon, the second was few minutes after its setting.

The second revision the processed image taking all available frames 50 with Moon and 11 without. Used is the unity gain for the camera - Gain 100, Offset 70.

Having some experience with DSLRs I'm very happy with the results from ZWO ASI533MC Pro as color camera. No darks or bias frames are applied! Just dithering and cooling to -20C

In the net saw some opinions that this camera is good entry level for imagers coming from DSLRs. There is need to make few serious sessions without Moon, however on this stage, my opinion is that ASI533MC Pro is great OSC that can give very good data when there is no time to make LRGB with mono camera. My plan is to use it as main imager during astro parties 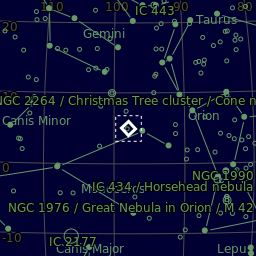