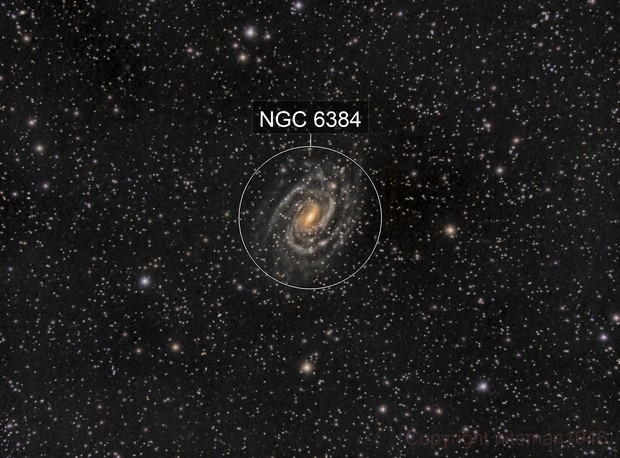 NGC 6384 is an intermediate barred spiral galaxy located about 77 million light-years away in the northern part of the constellation Ophiuchus. It's morphological classification indicates that it is a weakly barred galaxy (SAB) with an inner ring structure (r) orbiting the bar, and moderate to loosely wound spiral arms (bc). The galaxy is inclined by an angle of 47° to the line of sight, along a position angle of 40°. The estimated mass of the stars in this galaxy is 105 billion times the mass of the Sun.
At one time NGC 6384 was considered a normal galaxy with no activity in the nucleus. However, it is now classified as a transition object (T2), which is thought to be a LINER-type galaxy whose emission-line spectra is contaminated by H II regions in the nucleus.
On 24 June 1971, a type Ia supernova event was discovered in this galaxy at 27″ east and 20″ north of the nucleus. It reached a peak visual magnitude of 12.85 around the end of June. Designated SN 1971L, it was situated along a spiral arm, suggesting that the progenitor was not a member of the older, more evolved stellar population of the galaxy. [Source: Wikipedia]

Processing was done with PixInsight, following (for the most part) kayronjm's tutorial of Feb. 24th. Only L was used to develop the Luminance image. R, G and B were collected for the color mix.
North is to the right (I think), and this is a slight crop due to the misalignment accumulation from so many different filters and times.

COMMENTS:
This was an overall tough target. From our skies it is dim and lacks much color. I did boost both with the processing software and as a result, this image suffers (a bit) from over-processing.
It's interesting that in the 2nd paragraph from the above general description, there is a reference to H II in the nucleus. I did make an attempt to capture some Ha filter photons in order to give the image a red boost. However I saw no benefit. 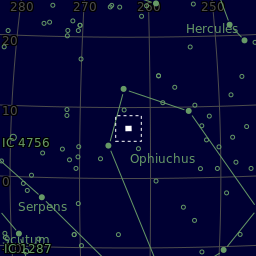