The Jellyfish nebula (IC443) is the name given to a galactic supernova remnant situated in the constellation Gemini about 5000 light years from Earth. The remains of a supernova that exploded prior to the dawn of the Julian and Gregorian calendars is coincidentally bookended by two bright stars in the frame, Eta Geminorum aka Propus/Praepus/Tejat Prior on the right and Mu Geminorum aka Tejat/Calx on the left side.

The narrowfield framing shows the partial shell of supernova remnant (G189.0+03.0) with its distinctive Jellyfish shape in the bottom right quadrant interacting with the molecular clouds surrounding it above and to the left, seemingly as though it is striking them with bolts of lightning. The interactions of the remnant with its surroundings all around are what give rise to its eponymous shape. The four dark nebulae (LDN1565-156

towards the left in the top half are situated within Sh2-249, which also includes IC444 and LDN1564. The widefield framing (coming soon) showcases the full extended region of about 70 light years properly, also with Drizzle and LocalNormalization so that the banding goes away.

I once again did what I did earlier, i.e., imaged the target with two scopes to get two different framings and then combined all the data together, which was collected over two years. One of the difficulties I had with this particular target was that the moon would also rise up along with nebula when it would begin to appear in the sky for me (late fall) so there were several hours worth of exposure that had to be thrown away. Given that it is a relatively bright object, I managed to collect enough signal to produce a decent series of images for each framing. The narrowfield series consists of seven images: (A) Ha, (B) L (m-sho), and three colour combinations (C-E) of the SHO data created using the Ha data for luminance, the last two processed using TopazStudio. This is followed by two different colour versions (F,G) of the SHO data created using a synthetic luminance layer that is a mix of the same data.

I'm curious to hear people's thoughts on which of C, D, and E they like - on this site, E looks like overkill but on my website, it's my favourite. D is the middle ground and C is just with PixInsight. Thoughts? 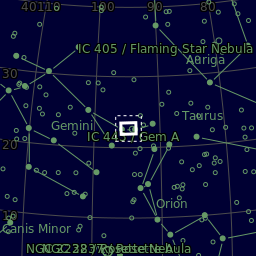