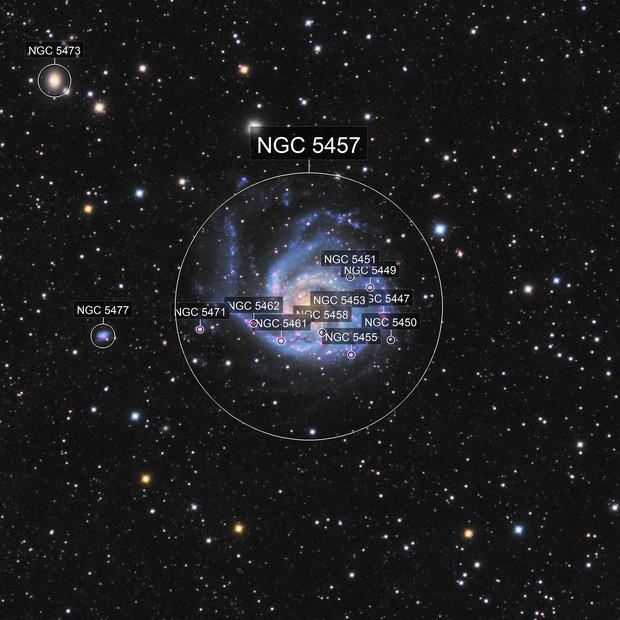 The Pinwheel Galaxy (also known as Messier 101, M101 or NGC 5457) is a face-on spiral galaxy distanced 21 million light-years away from Earth in the constellation Ursa Major. First discovered by Pierre Méchain on March 27, 1781, it was communicated to Charles Messier who verified its position for inclusion in the Messier Catalogue as one of its final entries.

M101 has a high population of H II regions, many of which are very large and bright. H II regions usually accompany the enormous clouds of high density molecular hydrogen gas contracting under their own gravitational force where stars form. H II regions are ionized by large numbers of extremely bright and hot young stars; those in M101 are capable of creating hot superbubbles. In a 1990 study, 1264 H II regions were cataloged in the galaxy. Three are prominent enough to receive New General Catalogue numbers - NGC 5461, NGC 5462, and NGC 5471.

M101 is asymmetrical due to the tidal forces from interactions with its companion galaxies. These gravitational interactions compress interstellar hydrogen gas, which then triggers strong star formation activity in M101's spiral arms that can be detected in ultraviolet images.

M101 has five prominent companion galaxies: NGC 5204, NGC 5474, NGC 5477, NGC 5585, and Holmberg IV. As stated above, the gravitational interaction between M101 and its satellites may have triggered the formation of the grand design pattern in M101. M101 has also probably distorted the companion galaxy NGC 5474. M101 and its companion galaxies comprise most or possibly all of the M101 Group.
(c) Wikipedia 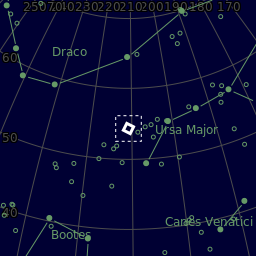