By accumulating a very-long-time of exposure, the dust and gas show up, exhibit a complex and chaotic structure consisting of dense cloud cores surrounded by an interconnected network of ﬁlaments and sheets. Many voids surrounded by partial arcs or nearly complete rings are also seen. This complicated structure is one possible signature of supersonic turbulence.

The eastern (upper) end of the cloud is associated with IC 348 that contains several hundred young stars. Most of the star formation in IC 348 took place within the last 3 Myr, but some stars in this region formed 10 Myr ago. The apparent age spread in IC 348 may be an indication that two episodes of star formation have occurred. IC 348 appears to be an example of a region that is at or near the end of its star-forming phase.

The western (lower) portion of the Perseus cloud contains the most active region of star formation in the Perseus molecular cloud, including the NGC 1333 cluster. It contains around 150 stars with a median age of a million years, is one of the most active sites of ongoing star formation in the sky within 1500 light-years of the Sun. The molecular ridge extending south (left) from NGC 1333 contains many Herbig–Haro objects, which are bright patches of nebulosity associated with newborn stars.

Between IC 348 and NGC 1333, right in the middle of this photo, there is an area that appears pinky, which is a low-surface brightness HII region surrounded by a dust ring G159.6-18.5, which appears to lie behind the obscuration of the Perseus molecular cloud. The intense ultraviolet light emitted by the central star HD 278942 ionizes the surrounding hydrogen, giving this region its characteristic pink color. The star appears red in this photo and would have been a blue-white star if it were not obscured by dust. The presence of HD 278942 and its HII region suggests that that massive stars may have formed in the recent past within the Perseus molecular cloud.

BTW, the cloud of dust, which obscures the central star and the HII region, is called the“Flying Ghost Nebula” because of its shape.

The area to the west (lower) of the HII region looks relatively empty without too much dense dust, and particularly dark here because the extinction in this region remains high. Perhaps this dead-zone is the youngest portion of the Perseus molecular cloud, formed by the expansion of the dust ring G159.6-18.5.

There are more areas full of dense dust to the south (left) of NGC 1333, see another photo I took if you are interested: https://www.astrobin.com/ggdhla/C/ 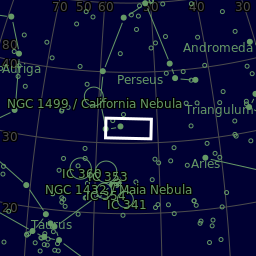