Centaurus A Galaxy and it's Filaments

Centaurus A Galaxy and it's Filaments

Centaurus A is the 5th brightest galaxy in the sky, situated about 12 million light years away. It has a peculiar shape and the theory behind this unusual appearance is that it was once an elliptical galaxy that collided with a smaller spiral galaxy.

I have imaged this a couple of times before but was inspired by the image from Rolf Olsen (who lives in my home city of Auckland) to try and capture the red filaments revealed in his 130 hours deep field image from 2013 (with extra added in 2018). In Rolf’s image he revealed filaments A and B.
However, in 2017, scientists discovered filament C running perpendicular to filaments A and B.

I was also inspired by Connor Matherne’s image in 2020 (and IOTD on Astrobin) which I understand to be the first amateur image to show all three jets.

The very bright area at the center of the galaxy is known as an “active galactic nucleus” produced as a result of the galaxies central supermassive black hole accelerating particles away from the poles of the spinning accretion disk at high velocities and producing jets shooting out from the black hole.

From what I understand (please forgive me if I have interpreted some of the information incorrectly), the jet shooting out on one side of the galaxy (referred to as the northern jet), is photoionizing the hydrogen in the interstellar medium.  It has also been noted that there are young stars in the inner and outer filaments (filaments A and B) and this could be an example of jet-induced star formation. The ionization coming from these stars appears to be insufficient to explain the high levels of ionization in the clouds that make up the filaments and so it is thought that the ionization producing the bright filaments may be from a combination of ionization from these young stars and ultraviolet photons originating from the jets of the AGN (active galactic nucleus).

Filament C, on the other hand, runs perpendicular to the other two filaments and it has been suggested that this filament could be the result of ionization from the galactic wind.

But if there is also a jet and galactic wind to the south, why have there been no definite filaments confirmed there? One theory is that the distribution of neutral atomic hydrogen in a ring around Centaurus A is such that the hydrogen to the south of the galaxy is outside the plane of the jet in three dimensions. However, I note in Connor’s image, some red is present to the south which could hint at the possible presence of some interaction between the southern jet and the hydrogen gas in the interstellar medium.

So the challenge for me was to show all three filaments A, B and C in my image which I feel I have successfully achieved with my 40hrs of Ha. Unfortunately, due to long runs of rain and cloud, I was somewhat limited in the time spent on the R, G and B filters and no data with my luminance filter using my Sky Watcher Esprit 120 and ASI2600mmPro rig and as a result my image has not shown the detail of the extended halo of the shell-like structures.

Because of the limited R,G,B data using the Skywatcher Esprit 120, I combined it with my data collected with my Meade 10inch SCT and ASI1600mmPro from back in April this year to improve the detail of the galaxy and it’s dust lane in this final image.

Centaurus A has not yet left our skies here down south and so it may be possible to add more data to this if the clouds and rain would please go away!

(Mouse over the image to see the filament labels.)

EDIT: I have just been in touch with Rolf Olsen and a small portion of a southern jet was in fact detected in his image from 2013 (please see link below). He also kindly let me know that there is a hint of it in my image which I have labelled with the letter S when you mouse over the image.
I can see this area showing up in Connor Matherne's image also.
https://www.rolfolsenastrophotography.com/Astrophotography/Centaurus-A-Extreme-Deep-Field/i-Z2Zsqs4?fbclid=IwAR25NY64aK2OoWrqs2SJVJf96F6U_6YzrgwiNU8W_7kBmGkJJukPeXBH_uo 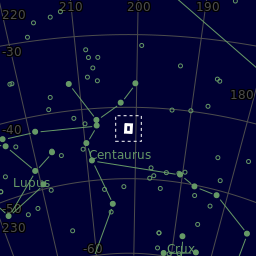