this was processed using the addition of the O-III signal to the R&B in appropriate proportion and then photometrically color corrected to the star color in PI, i.e. I think the color is right.

Please note how few subs are used in this image, these are the best of more, but I recently ran into a Topaz AI tutorial by Trevor Jones that helped me tweak the settings to get maximum noise removal and sharpness. I could add more subs, but I have a lot of targets on my list.... and I am not sure that doubling the number of subs will add much detail here.

Technical info on the PN:

H. E. Bond, Department of Physics and Astronomy, Louisiana State University, writes: "The central star of the planetary nebula Abell 46 (R.A. = 18h29m.2, Decl. = +26o53', equinox 1950.0) has been found to be an eclipsing binary with an orbital period of 11h19m. Observations with high-speed photometers and 0.9-m reflectors at Louisiana State University and Kitt Peak National Observatories reveal a primary minimum 48 min in duration and 1.4 mag deep (in the B band) due to a partial eclipse of the hot component of the system. The light curve exhibits a hump 0.5 mag high near orbital phase 0.5, caused by strong heating of one hemisphere of the cool companion. The secondary eclipse is about 0.1 mag deep. Heliocentric times of primary minimum are given by JD 2444350.8214 + 0.47170 E. Aside from the slightly lower inclination, Abell 46 is remarkably similar to UU Sge, the eclipsing nucleus of Abell 63 (Bond, Liller and Mannery 1978, Ap.J. 223, 252). UU Sge and the central star of Abell 46 are now the only two known definite close-binary nuclei of planetary nebulae." 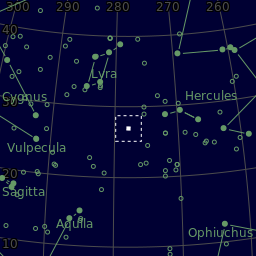