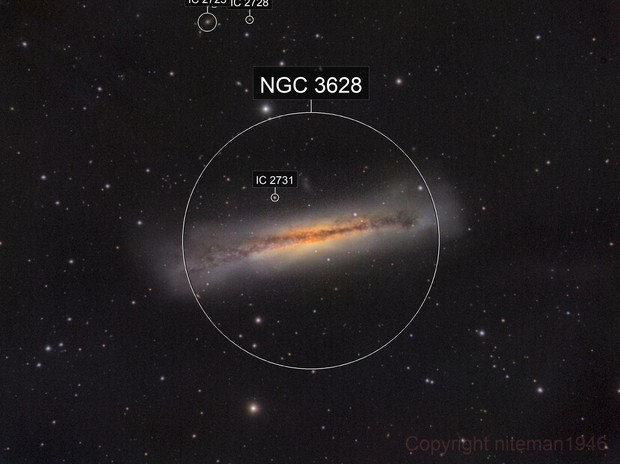 NGC 3628, also known as the Hamburger Galaxy or Sarah's Galaxy, is an unbarred spiral galaxy about 35 million light-years away in the constellation Leo. It was discovered by William Herschel in 1784. It has an approximately 300,000 light-years long tidal tail. Along with M65 and M66, NGC 3628 forms the Leo Triplet, a small group of galaxies. Its most conspicuous feature is the broad and obscuring band of dust located along the outer edge of its spiral arms, effectively transecting the galaxy to the view from Earth.
Due to the presence of an x-shaped bulge, visible in multiple wavelengths, it has been argued that NGC 3628 is instead a barred spiral galaxy with the bar seen end-on. Simulations have shown that bars often form in disk galaxies during interactions and mergers, and NGC 3628 is known to be interacting with its two large neighbors. [Source: Wikipedia]

Processing was done with PixInsight, following (for the most part) kayronjm's tutorial of Feb. 24th from several years back. Only L was used to develop the Luminance image. R, G and B were collected for the color mix.
As with the previous M109 image, I put the “Game” mask to good use. This tool allows you to create an image mask featuring an elliptical mask of any size and orientation. In the case of M109, I used multiple ellipsies in one image to cover its various galaxies. Nothing has been said by the creator of PixInsight, but I suspect this approach violates his coda of never “painting”. However, it’s one hell of a handy tool.
North is to the right (pretty sure), and this is a slight crop due to the various movement of different subs.
COMMENTS:
This is my second run at NGC3628. The first time was in 2011 using my Canon Xsi (modded) DSLR. This image is much better.
a) There had been a problematic remnant of an airplane streak just under the galaxy in a mostly horizontal orientation. 9.5hr of luminance subs finally removed this feature.
b) There is a very bright star just a bit outside of the upper left corner. Unfortunately, it cast substantial reflection into the field of view. A keen eye can see where I used the PixInsight Clone Stamp tool to eliminate this feature.

Fairly satisfied with the results, although there was little noticeable difference between the 3.33hr luminance and 9.50hr luminance. 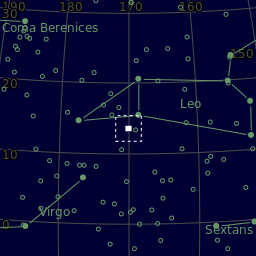