NGC 4038 and NGC 4039 are known as the Antennae galaxies. They are located near western edge of Corvus.

This pair of interacting galaxies was discovered by William Herschel on February 7, 1785,

NGC 4038 and 4039 have a visual magnitude of 10.5 and 10.3, respectively, and their cores appear both 5.4 arc minutes across. The nuclei of the two galaxies are joining to become one giant galaxy; two long streamers of ejected stars, gas and dust extend outward from their centers, making two long tails (shown) which resemble the antennae of an insect.

This is a simple LRGB composition. 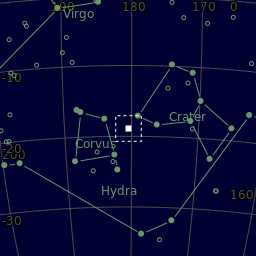