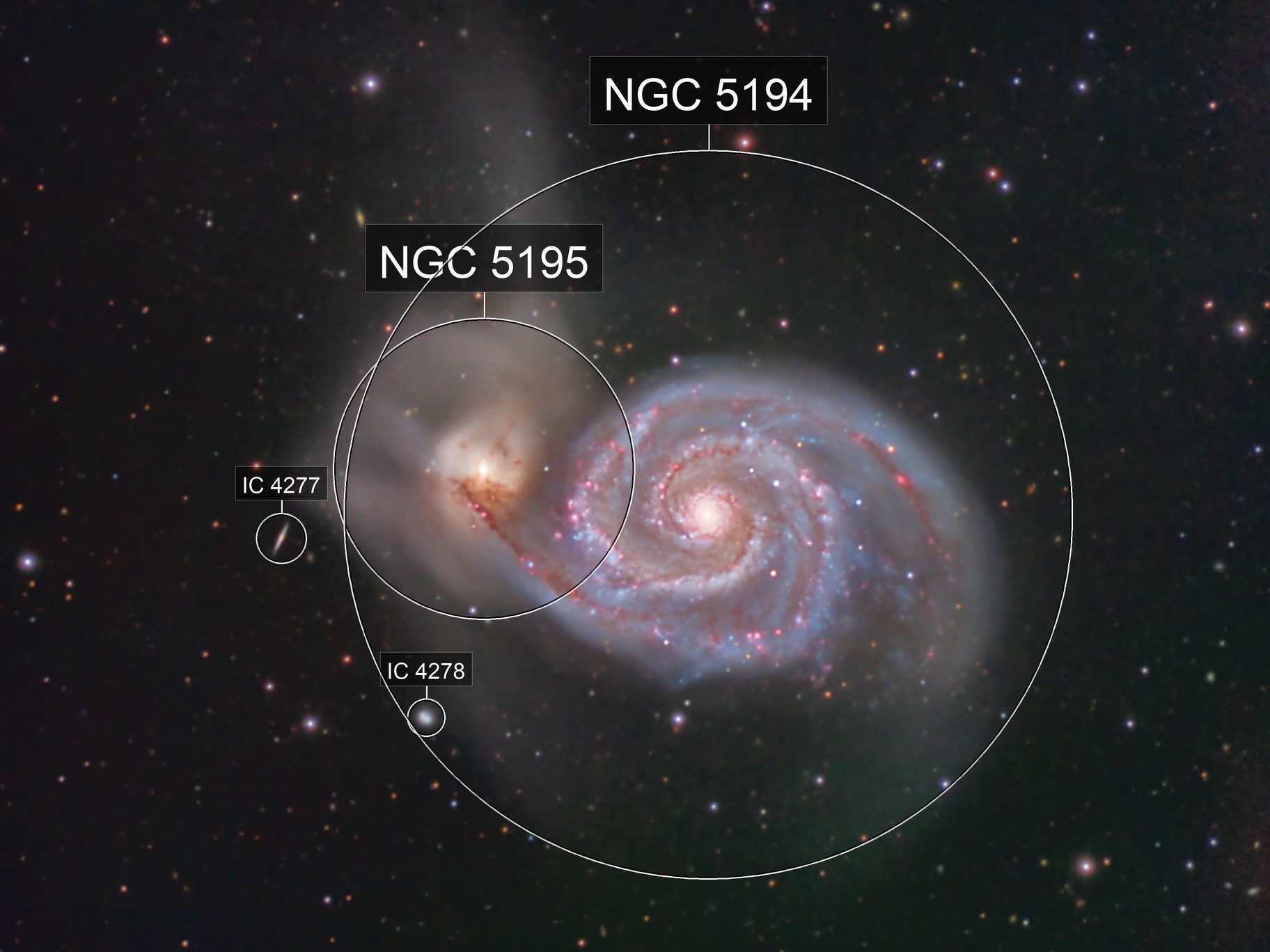 During my April 2021 astrophotography trip to Casitas de Gila, Gila, New Mexico, I imaged M51 (NGC 5194), the Whirlpool Galaxy in the constellation Canes Venatici (the hunting dogs). M51 and its companion NGC 5195 are one of the most observed and photographed deep sky object. I captured Hydrogen-, Luminance, Red, Green and Blue filter subframes over two very long nights, imaging from 9:00PM until 5:00AM the next morning. To date, this is one of my best galaxy images showing good detail, a large number of star forming regions and the grand distortions caused by the gravitational interactions.

M51 and NGC 5195 are prime examples of gravitational interactions between galaxies. The Whirlpool galaxy is a spiral type SA(s)bc pec. It is about 76,000 light years in diameter, and it is ~26 million light years from Earth. M51 has a very active supermassive black hole in its core. This and the interaction with NGC 5195 have promoted massive star formation as seen in the red emission nebula regions of the spiral arms.

NGC 5195 is a barred spiral type SB0 pec galaxy. It is 25 ± 3 Mly from Earth. The galaxies are connected by a dust-rich tidal bridge. The dust in this tidal bridge can be seen silhouetted against the center of NGC 5195. This demonstrates that NGC 5195 appears to lie behind the Whirlpool Galaxy. The encounter has significantly enhanced the spiral structure of M51. (NASA and Wikipedia).

There are several very faint and distant galaxies in the image; the edge on spiral IC 4277, and IC 4278.

For this project, I reduced the camera sensor cooling to -15oC. This reduced the noise significantly relative to the -10oC temperature I had been using. While the sky had good transparency, the Jet Stream was directly overhead causing the seeing to vary between average to below average. Temperatures in the high desert dropped by 16oC, so frequent refocusing was necessary. I had struggled with Sequence Generator Pro’s auto focus routine with the C9.25 at its 2350mm focal length. Once I found the correct settings for minimum star size (6 pixels) and the step size (400 – 450 steps for the Pegasus Astro Focus Cube 2), then the focus routine worked well with the few stars surrounding the galaxy. However, seeing conditions and occasional wind affected autoguiding and the stars were a bit bloated. 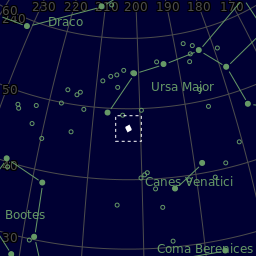