NGC 2070 Tarantula Nebula (aka. 30 Doradus) is an H II region in the Large Magellanic Cloud (LMC).

The Tarantula Nebula was observed by Nicolas-Louis de Lacaille during an expedition to the Cape of Good Hope between 1751 and 1753. He catalogued it as the second of the "Nebulae of the First Class", "Nebulosities not accompanied by any star visible in the telescope of two feet".

The Tarantula Nebula is an extremely luminous non-stellar object. Its luminosity is so great that if it were as close to Earth as the Orion Nebula, the Tarantula Nebula would cast visible shadows. In fact it is the most active starburst region known in the Local Group of galaxies. It is also one of the largest H II regions in the Local Group. Bbecause of its very large size, it is sometimes described as the largest although other H II regions such as NGC 604 which is in the Triangulum Galaxy could be larger.

The nebula resides on the leading edge of the Large Magellanic Cloud where ram pressure stripping, and the compression of the interstellar medium likely resulting from this, is at a maximum. 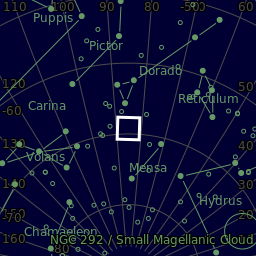